The Automotive Monthly Metals Index (MMI) posted no movement for our January reading, sticking at 97 after a four-point jump from November to December. 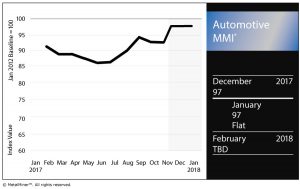 The January MMI reading — which tracks the sector’s December performance — has risen significantly in the last 12 months. The sub-index posted an 82 for its January 2017 reading.

Within the basket of metals, U.S. HDG steel and LME copper had big months. For the former, the metal rose 5.5% during the period in question, while Dr. Copper jumped 6.4%.

It was a down month for General Motors, which saw its sales drop 3.4% year-over-year in December 2017, with 308,112 units sold, according to sales data released Jan. 3 by Autodata Corp. GM thus closed the year with sales dropping 1.4% from its 2016 total.

Further down the sales list, Fiat Chrysler‘s December sales dropped 10.7% year-over-year and were down 8.2% for the year.

Volkswagen dropped 5.4% in December compared with December 2016, but came out ahead in 2017, with sales rising 6.1% at year’s end compared with the previous year.

Record Sales in 2017 for Tesla, But Struggles with Deliveries

As Business Insider UK reported, the electric vehicle (EV) maker hit record sales in 2017, but struggled with deliveries of its new Model 3.

The challenge for Tesla, of course, is transforming from a still relatively niche brand — catering to those who check the boxes of environmental mindfulness and being financially well off — to a mainstream automotive manufacturer capable of meeting demand with consistency.

It’s still unclear whether Tesla can do that, but EVs aren’t going away either way. Of course, Tesla isn’t the only player in the game, and competition in the EVs sector will only continue to grow in 2018 and beyond.

A big year is ahead for automotive sales in China.

And it’s not just about this year — according to William C. Ford Jr., executive chairman of Ford, the future of EVs will be led by China.

“When I think of where E.V.s are going, it’s clearly the case that China will lead the world in E.V. development,” he told The New York Times.

“Under the three-year agreement, both companies will jointly explore areas of cooperation that are re-shaping the automotive industry in China and around the world,” a Dec. 7 Ford news release states. “Ford will cooperate with Alibaba’s four business units in operation system, cloud computing, digital marketing and online retail respectively – namely AliOS, Alibaba Cloud, Alimama and Tmall – and jointly explore a variety of areas of cooperation including mobility services, connectivity, cloud computing, artificial intelligence and digital marketing.”

“China is one of the world’s largest and most dynamic digital markets, thriving on innovation with customers’ online and offline experiences converging rapidly,” he said in the release. “Collaborating with leading technology players builds on our vision for smart vehicles in a smart world to reimagine and revolutionize consumers’ mobility experiences.”

PREVIOUS POST:
This Morning in Metals: Chinese Steel Futures Fall Ahead of Dropping Demand
NEXT POST:
Does Gold’s Rise Have Anything to do with Bitcoin?