Home | Macroeconomics | Is the Predicted Stock Markets Fall a Correction or End of the Bull Run?
Market Analysis

Is the Predicted Stock Markets Fall a Correction or End of the Bull Run? 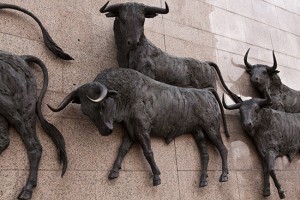 News that Goldman Sachs is advising investors that Wall Street is set for a sharp correction should come as little surprise following five years of almost uninterrupted growth in equity markets.

The investment bank’s prediction that a correction was a “high probability” is almost a no-brainer when you hear the comments of Peter Oppenheimer, chief global equity strategist at Goldman Sachs which were reported this week in The Times. The S&P 500, which tracks the share prices of America’s 500 largest public companies, and the MSCI World Index, which tracks about 1,650 companies across the world, are in their longest periods without a correction of more than 5%.

“This does not mean that the market must have a correction,” Oppenheimer said. “It just suggests that one is overdue.”

Goldman’s comments are echoed by Bank of America Merrill Lynch, saying Wall Street is very likely to suffer a short fall in the next few weeks. 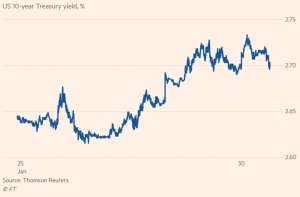 The Financial Times reports that the yield on 10-year U.S. Treasury hit 2.733% in Asian trading on Tuesday, after reaching 2.72%, the highest level since April 2014, the previous day. It has since pared its losses, settling just above 2.68%. After hitting record highs on Friday the S&P 500 and the Dow Jones industrial average both closed lower this week, along with Japan’s Topix and the Hong Kong Hang Seng. European stocks seemed less troubled but still close lower as profits were taken.

Interestingly, Goldman does not see the correction as the end of the bull story, saying global growth is running at about 5% — the strongest pace since 2010 — in a broad and synchronized economic recovery.

The bank sees any correction as an opportunity to buy, saying a correction of 5% this year which still only take global equity markets back to where they started 2018 and would be unlikely to cause much concern or damage. Typically, market corrections during long-running bull markets average some 13% over a four-month period, but take only four months to recover the lost ground. The depth of this selloff may be clearer from next week onwards with the current focus shifting towards the earnings season releases from the U.S. and Chinese market heavyweights in the tech sector.

Markets were also looking to Donald Trump’s State of the Union address this week as to whether it includes the long promised — but so far ineffectual — infrastructure spending that was such a significant part of equity market enthusiasm immediately following his inauguration last year.

Why would we worry about equity markets at MetalMiner, you may ask?

It’s simple: commodity prices have shown a strong correlation in recent years to equity markets, contrary to the position just after the financial crash when commodities and shares went in opposite directions. Maybe not surprisingly, oil has come off this week despite little change in supply and demand, and ignoring the growing threat of implosion in Venezuela.

No bull market runs forever and this has been going for some time. Many expect sharp rises in borrowing costs as central bank rate rises later this year or next to be the trigger for an end to the run.

So, it’s possible Goldman have this right and all we will get is a correction. Let’s hope they are right.

PREVIOUS POST:
Trump Goes After Trade Deals, Calls for $1.5T in Infrastructure Spending During His First State of the Union Address
NEXT POST:
Chinese Steel Prices Ease as Demand Softens in Winter Season