Trump Goes After Trade Deals, Calls for $1.5T in Infrastructure Spending During His First State of the Union Address 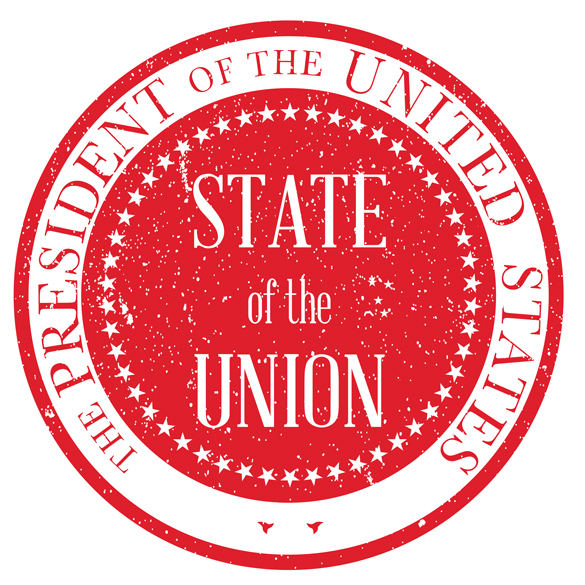 In an approximately 80-minute speech ranging from jobs and manufacturing to North Korea and Iran, President Donald Trump’s first State of the Union address also touched on issues impacting the metals industry — albeit, perhaps not as directly as one might have expected.

(As a brief aside, according to the American Presidency Project, which tracks the length of State of the Union addresses, Trump’s speech was the third-longest since the speech lengths were tracked beginning with the Johnson administration. Bill Clinton’s State of the Union addresses of 1 hour, 24 minutes and 58 seconds and 1 hour, 28 minutes and 49 seconds are the only addresses longer than Trump’s speech last night.)

Many in the metals industry were looking for good news regarding infrastructure (including, as we reported this morning, Nucor President and CEO John Ferriola during Tuesday’s quarterly earnings call). On that front, Trump called on Congress to put together a $1.5 trillion plan for infrastructure spending.

“Tonight, I am calling on the Congress to produce a bill that generates at least $1.5 trillion for the new infrastructure investment we need,” Trump said. “Every Federal dollar should be leveraged by partnering with State and local governments and, where appropriate, tapping into private sector investment — to permanently fix the infrastructure deficit.”

He also referred to streamlining the construction permitting process and reclaiming the country’s “building heritage.”

However, for those in the metals industry looking for policy specifics, particularly with respect to trade cases, Trump did not offer much.

For those paying attention to the ongoing Section 232 probes of steel and aluminum imports – of which Chinese excess capacity and state-aided commodities is a focus of much discussion — the president did not refer to those, or any other ongoing trade cases. This isn’t necessarily surprising for a State of the Union address, which are often short on policy specifics or nitty gritty minutiae, a which Section 232, Section 301, and other anti-dumping and countervailable duty investigations could fall under, depending on whom you ask.

Even so, the omission stood out, even as China — along with Russia — was mentioned as a threat.

Trump mentioned China three times: twice during a story about a North Korean defector and another time in a general call for defense spending. (Reuters reported recently that Trump is expected to ask Congress for $716 billion in defense spending for 2019, which would mark a 7% increase from 2018.)`

“As we rebuild America’s strength and confidence at home, we are also restoring our strength and standing abroad,” the president said. “Around the world, we face rogue regimes, terrorist groups, and rivals like China and Russia that challenge our interests, our economy, and our values. In confronting these dangers, we know that weakness is the surest path to conflict, and unmatched power is the surest means of our defense.”

In addition, the word “steel” was only mentioned once in the speech, and that in a metaphorical sense when extolling Americans’ perseverance and the “steel in America’s spine.” Aluminum was not mentioned once during the speech.

While anti-dumping and countervailable duty investigations didn’t get their time in the State of the Union sun, Trump did once again reiterate his stance on what he perceives as bad trade deals — particularly relevant in the shadow of North American Free Trade Agreement (NAFTA) renegotiation talks that concluded Monday in Montreal, capping the sixth round of talks focused on revamping the now 24-year-old trilateral trade deal.

On trade, Trump said the “era of economic surrender is over.”

Trump signed an executive order withdrawing the U.S. from the Trans-Pacific Partnership on his first day in office. He has also consistently attacked NAFTA, which he has called the worst trade deal ever made, citing the loss of American manufacturing and jobs.

“From now on, we expect trading relationships to be fair and to be reciprocal,” Trump said. “We will work to fix bad trade deals and negotiate new ones. And we will protect American workers and American intellectual property, through strong enforcement of our trade rules.”
According to U.S. Census Bureau data through November, the U.S. had a $65.68 billion trade deficit with Mexico last year and a $15.33 billion deficit with Canada.
Scott Paul, president of the Alliance for American Manufacturing, was not impressed with Trump’s presentation on trade and infrastructure.

Very concerned after #SOTU about the direction of Trump’s trade and infrastructure policies. Trade was all rhetoric, nothing new, and could have been given by Obama, Bush, or even Clinton. Infrastructure included no Buy American commitment. We’ve got work to do.

In general economic indicators, Trump touted job creation figures, saying that since the election (a time frame which of course includes the final months of the Obama administration), “we have created 2.4 million new jobs, including 200,000 new jobs in manufacturing alone.”

According to the Bureau of Labor Statistics, 2.1 millions jobs were added in the 2017 calendar year, down from 2.2 million in 2016.

PREVIOUS POST:
This Morning in Metals: Copper Rises as Dollar Falls
NEXT POST:
Is the Predicted Stock Markets Fall a Correction or End of the Bull Run?