Initially, electric and now the development of autonomous cars has been a major disrupter for the auto industry, the effects of which we have only just begun to see.
Need buying strategies for steel? Try two free months of MetalMiner’s Outlook
Traditional auto manufacturers were initially written off as having too much legacy investments in the internal combustion engine and insufficient technology to keep up with the development of electric and self-driving cars. However, the last year or two has seen the likes of Nissan, General Motors, and a host of others bring out if not cutting edge electric vehicles to challenge Tesla’s sexy image at least viable mainstream products with greater delivery dependability than Tesla’s Model 3 rollout is achieving.
While starting from a low base growth has been solid, and although the electric vehicle (EV) challenge has driven much improved economy from the internal combustion engine, EVs are still carving out a place for themselves as battery performance steadily improves and charging infrastructure expands. 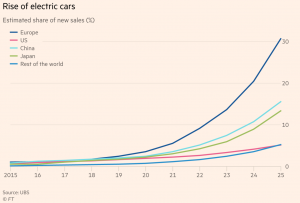 So far the contest has been between established mainstream automakers – GM, Ford, Daimler, BMW, etc., and Silicon Valley tech firms (Tesla, Google and others), but so disruptive are the technological changes that challengers from other areas are throwing their hat into the ring.
Electric and autonomous carmaking requires a marriage of innovation and highly developed manufacturing experience. Tesla has the former but not the latter – witness the debacle of the Model 3. The established carmakers have the latter but not the former – witness their scramble to buy technology start-ups to bolt on the skills.
But a highly successful and highly innovative manufacturer with world-class experience in electrical product manufacturing is entering the fray with a £2 billion (U.S. $2.8 billion) bet.
Dyson is planning to invest in a new automotive manufacturing operation with R&D at its head quarters near Malmsbury in the U.K. Apart from expertise in electric motors, Dyson has also worked extensively in plastics, the Financial Times explains, leading some to speculate the first vehicle may be substantially comprised of plastics rather than metals, ostensibly to make the cars lighter and also allow for more inventive designs.
They also have the money, as growth has been impressive, achieved on the back of relentless innovation and clever product design. Nor does Dyson have to answer to the stock market or have to watch the share price in the way a listed firm does, which allows them to take the long view on high-risk projects. 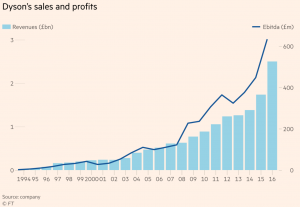 Three models are said to be in mind. The initial ONE would be a low production run to develop the technologies and build out a supply chain. This first vehicle would likely use lithium-ion batteries, but later models would use next generation solid-state batteries, a technology Dyson is, if not a world leader, then certainly at the cutting edge. Among existing carmakers, only Toyota has laid out a timeline to release a solid-state battery powered car by 2025, the Financial Times says.
Dyson has an ambitious program, particularly considering it hasn’t even decided where they will manufacture the cars. The firm is looking to launch its first low production run model – in the region of thousands, not tens or hundreds of thousands by 2021, followed later by high volume models 2 and 3 based on more advanced battery technology.
Dyson is most likely to set up manufacturing in Asia, as that is where it sees its biggest sales market. More specifically, it would probably set up in Singapore or Malaysia, where it already has extensive manufacturing infrastructure for its electrical products.
Free Download: The February 2018 MMI Report
Where Dyson may have a lead is in this solid-state battery technology. Batteries and, hence, range are considered the key to wider EV uptake. Where Dyson may struggle further down the road is in the development of autonomous self-driving cars, where its success in developing a viable product will depend on the extent to which such technologies become mainstream and available from specialist suppliers, rather than held in-house as proprietary patented technologies by the likes of Google, Tesla and others.