The Construction MMI (Monthly Metals Index) dropped one point this month, falling to 93 for our March reading. 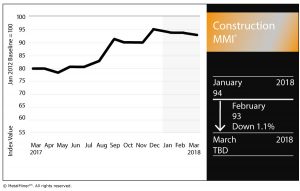 Within the basket of metals for the Construction MMI, Chinese rebar and H-beam steel prices dropped on the month. Meanwhile, U.S. shredded scrap steel rose 8.4% on the month, while European commercial 1050 sheet fell 3.0%.

According to U.S. Census Bureau data for January, total spending stood pat from December, but was up year over year.

Construction spending during January 2018 was estimated at a seasonally adjusted annual rate of $1,262.8 billion, up minimally from the revised December estimate of $1,262.7 billion, according to the Census Bureau.

Meanwhile, spending on private construction was at a seasonally adjusted annual rate of $962.7 billion, 0.5% above the revised December estimate of $967.9 billion.

Just like other metal-using sectors, the construction industry would also be impacted by President Trump’s announced steel and aluminum tariffs (especially steel).

Trump’s announcement came just over a month after Trump proposed $1.4 trillion in infrastructure investment over 10 years.

For a construction industry that saw spending flatten in January, a rise in materials costs would not be great news, should the tariffs become the law of the land.

According to Philip Gibbs, an analyst at KeyBanc Capital, the tariffs might give steel stocks a short-term “sugar high,” he told Reuters, but that unsustainable pricing could eat into demand from manufacturers.

The National Association of Homebuilders (NAHB) came out against the tariffs proposal, with the association’s chairman saying the tariffs would hurt consumers and make housing less affordable.

“It is unfortunate that President Trump has decided to impose tariffs of 25 percent on steel imports and 10 percent on aluminum imports,” said Randy Noel, chairman of the NAHB. “These tariffs will translate into higher costs for consumers and U.S. businesses that use these products, including home builders.

“Given that home builders are already grappling with 20 percent tariffs on Canadian softwood lumber and that the price of lumber and other key building materials are near record highs, this announcement by the president could not have come at a worse time.”

Of course, the metals world is still in wait-and-see mode regarding the tariffs, which have yet to become actual law.

PREVIOUS POST:
Gravity May be Reasserting Itself in China’s Aluminum Smelter Sector
NEXT POST:
How Will Trump’s Proposed Tariffs Impact India?