Back in 2016, after nearly 30 years of asking, the International Maritime Organization (IMO) — the U.N. body that polices the marine industry — finally succumbed to collective outrage and announced a change to take effect from 2020 leading to an effort to clean up ship pollution.

IMO rules currently allow ships to burn fuel containing up to 4.5% sulfur — that is 4,500 times more than is allowed in car fuel in the European Union. This high-sulfur fuel — or bunker fuel as it’s known — is the dirtiest residual combustible material left over in refineries. When burned, it releases plumes of black smoke, familiar to anyone in a port area watching a large container or cruise liner leaving a haze over the port area.

A ship is said to emit around 50 times as much sulfur as a modern lorry per metric ton of cargo, while of total global air emissions, shipping accounts for 18 to 30% of the nitrogen oxide and 9% of the sulfur oxides, in addition to carbon dioxide and carbon particulate matter. One possibly alarmist article in the Daily Mail suggested the largest ships can each emit as much as 5,000 tons of sulfur in a year – the same as 50 million typical cars, each emitting an average of 100 grams of sulfur a year. With an estimated 800 million cars driving around the planet, the article suggests that means 16 super-ships can emit as much sulfur as the world fleet of cars.

So, overdue then for the IMO to take action, what happens now? Will ship owners fit scrubbers to clean up emissions, or will they switch to low-sulfur gas oil distillates, a form of low sulfur diesel?

A Financial Times article quotes the SEB, a Nordic research house, saying only 2,000 of the 18,000 vessels that carried crude, dry cargo and other container ships would have scrubbers installed by 2020. Together they consume close to 4 million barrels a day of what is known in the industry as high-sulfur fuel oil. So, the rest will seek to be fuel-compliant, switching to low-sulfur derivatives.

You may think that would be a problem for refiners — not so.

Almost all European and North American refineries can produce low-sulfur fuel oil and not be left with unsaleable waste. But refiners are not going to miss the opportunity to raise margins from the switch to higher grades; indeed, the process has already begun.

In the European Union, the rule change will raise refining margins by an average of 60 cents, to $8.10 per barrel in 2020, JPMorgan is quoted as saying by Bloomberg. The fuel shift is already starting to appear in futures prices. In Europe, the premium that low-sulfur fuel oil attracts over its dirtier counterpart in January 2020 has grown by 66% since the start of the year, according to Bloomberg. 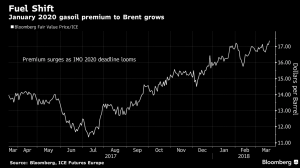 The SEB, quoted by the Financial Times, agrees, reporting the 2020 high-sulfur fuel oil to gas oil price spread traded at $220/metric ton on a forward basis in the early autumn of 2017. Then it blew out to as much as $350 at the start of 2018 and SEB expects a further widening to $450 later this year. With half the variable costs of a shipping line taken up by fuel, this heralds a rise in global freight rates as we near 2020 and shipping lines are required to pay for low-sulfur fuel oil.

That is, of course, if a trade war doesn’t derail global growth and the ocean freight market first.

PREVIOUS POST:
This Morning in Metals: South Korea Gets Steel Tariff Exemption
NEXT POST:
Tariffs Are About More Than U.S. Jobs