President Trump’s announcement that he could impose 25% tariffs on $60 billion of Chinese imports is ostensibly about the massive and growing trade imbalance between the U.S. and China — but one senses that underneath is a deeper and even more significant power play going on.
Need buying strategies for steel? Try two free months of MetalMiner’s Outlook
The move is a challenge to a foreign aggressor who, despite all protestations to the contrary, has used a mercantilist policy to support the blatant theft of intellectual property and centralist support to build strategic champions with the aim. It sounds alarmist, but it’s hard to draw any other conclusion.
The White House has said that after months of investigation it has found a systematic pattern of “forced technology transfer” and “cyber theft” by the Chinese regime, a policy it described as “economic aggression.” The resulting sanctions list covers 1,300 products — focusing on aerospace, robotics, electric vehicles (EVs) and biopharma — and tracking most of the 10 strategic sectors announced by the Communist Party in its “Made in China 2025” technology plan (a roadmap released by the State Council in 2015 to guide the country’s advanced industrial manufacturing).
The program comes with billions in state and regional financial support, government-funded research, tax breaks and subsidies to buyers to fast track manufacturing scale – think EVs and solar panels as just two examples of how China has created competitive domestic manufacturing scale in no time.
The three biggest U.S. imports from China are mobile telephones, laptops, and network equipment. In each case, China is the dominant global supplier with around 70% of the world market. Alternative sources are scarce. Although the U.S. is technically capable of manufacturing them – the technology was mostly American in the first place – U.S. manufacturing capability is not going to spring up overnight.
Investors will be wary in case tariffs are removed and a bright shiny new plant in the U.S. is suddenly uncompetitive again. Let’s face it — that’s why the plants went in the first place. It was cheaper to manufacture elsewhere. 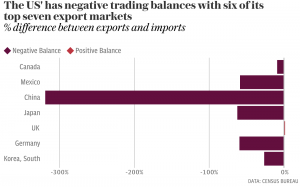 Assuming there is some grand strategic plan behind Trump’s imposition of tariffs is misguided. The reality is his administration has multiple objectives. It genuinely wants to reduce a current account deficit with China that has mushroomed in recent years. 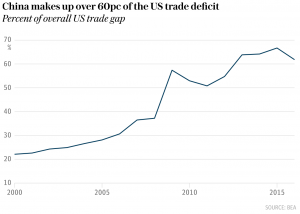 For China, to say its surplus with the U.S. has fallen from 6% to 2% over the last decade is to ignore the fact the economy is twice the size it was a decade ago. The surplus is still $375 billion, almost half of America’s $800 billion trade gap with the rest of the world.
The U.S. has run trade deficits with many countries over the decades – Germany, Japan, South Korea and more. But these countries are seen as allies; China, to be blunt, is increasingly being seen as an adversary.
The long-held view that economic growth and rising living standards would make China more open with the rest of the world have proved mistaken. If anything, China is more centrist, more manipulative of its economy and society than it was 10 years ago. President Xi’s recent change of the law to allow himself to be president for life is just one example of a return to old Maoist ways.
Lower your aluminum spend – Take a free trial of MetalMiner’s Monthly Outlook!
So here is another major plank of the administration’s case against China: the U.S. genuinely fears for its future if China is allowed to continue on this mercantilist path, creating global champions with the intention of taking on the world.
Many doubt whether tariffs are a solution, but you can understand the frustration in Washington and the desire for action. It is to be hoped some form of negotiated outcome will, eventually, be achieved, but it’s hard to see how China will compromise its long-term strategic plan to appease the U.S. or anyone else.