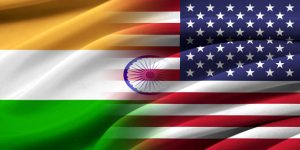 India found itself on the back foot in the first meeting of trade representatives from India and the United States in the Indian capital, New Delhi, last week. It was held to discuss the latest U.S. trade tariffs on steel and other metal imports.

According to reports, while the Indian delegation did speak of the “harsh” tariff on aluminum, the U.S. team kept bringing up the need to have “a greater balance in bi-lateral trade,” which experts claim, was currently in India’s favor. The U.S. team was led by Assistant U.S. Trade Representative Mark Linscott.

A report in the Financial Express said the U.S. side also delved at length into India’s intellectual property regime, and sought a relaxation in its provisions on ever-greening of patents, which has been a longstanding demand of the U.S.

If the Indian trade delegation had thought that it would have an upper hand in the discussions, it did not seem so. The U.S. counterparts sought a better trade balance with India through greater access to American products, and the removal of restrictions on the pricing of medical equipment like bioresorbable stents.

The Indian side reiterated its demand that the U.S. should roll back the increase in import tariffs on steel and aluminum, announced last month, where India was concerned. The U.S. had imposed a 25% levy on steel and 10% on aluminum on a handful of countries, including India and China.

The Linscott team remained noncommittal to this request, according to reports, except for saying the sentiments would be conveyed to Washington.

Under the Generalised System of Preference (GSP) program, select developing countries are allowed to export specified products duty-free to the U.S. India has often been at the top of this list. Exports of select items in the textiles, engineering, gems and jewelry, and chemical sectors are allowed duty-free access to the U.S.

The GSP between the two nations expired recently, and now it’s seen as the U.S. wanting to link it to the trade balance. India has conveyed that this would not be a prudent step for trade between the two countries.

This first in a series of trade meetings will culminate in the trade policy forum meeting to be held later this year.

Earlier in the month, Alice Wells, principal deputy assistant secretary for South and Central Asian affairs, told The Hindu newspaper that while America’s average tariff was a little over 3%, India’s was over 13%, and that this disparity was the source of the friction.

While India goes about trying to get some relief from the high tariff, it faces another salvo from another side on the same subject, this time from the European Commission (EC).

The latter had initiated “safeguard investigation” on steel products to ascertain whether import tariffs imposed by the U.S. need to be countered to prevent Asian producers from flooding the European market. Analysts claimed this would have a significant bearing on India’s steel exports.

The investigation, the notice for which was issued recently, will cover India as well, though it is targeted primarily at the U.S. India is estimated to have shipped around 3.0-3.5 million tons of steel to Europe so far this fiscal year. The EC investigation was initiated on a suo moto basis, and covers about 130 items in all grades of steel.