It is a question we often see on the financial pages of newspapers or news sites, but rarely take time to seriously consider the consequences – why is the West apparently in a period of stagnant productivity growth?
Need buying strategies for steel? Try two free months of MetalMiner’s Outlook
A recent article in The Telegraph explores the position for the U.K., but many of the trends observed — and, likely, reasons behind — Britain’s poor productivity growth are very similar to those in the U.S. and the rest of Europe.
For the sake of good order, we should define productivity growth. Simply put, it is a measure of the efficiency of production, usually measured as the ratio of inputs to outputs, or output per unit of input. Clearly, for workers to be paid more without a firm going bankrupt, just as for a country to raise living standards without living beyond its means, productivity per unit of labour has to increase over time. And so it has broadly over time, but not in a straight linear fashion, and therein lies a clue to our current malaise, the authors of the article suggest. 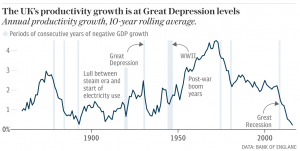 The article draws substantially on comments made and work done by Ben Broadbent, the Bank of England’s deputy governor. Broadbent fears Britain is past its peak and destined for a sustained period of poor growth in living standards due to stagnant productivity growth. Measuring productivity growth is far from easy, not least because “work” changes. In the days when most outputs were delivered by the manufacturing industry, it was easier to measure inputs and outputs; in today’s digital world, many services, like the internet, are largely free at the point of use.
Yet even so, the trend is clear: over the past decade, productivity has grown by just 2.1%, according to the Office for National Statistics as quoted by the news source. That is compared to before the financial crisis, when it typically grew by more than 2% every year. As a result, for much of the 2008-2014 period, real wages were in negative territory, a situation that was variously blamed on the financial crash, low interest rates perpetuating companies that would otherwise go bust, and lack of finance to allow firms to invest.
But Broadbent believes it is more deep-seated than those reasons, saying the wave of benefits seen from digitization we accrued in the 1990s and early 2000s has now passed. In addition, he argues, our position now is more akin to the industrial world’s lull between the age of steam and the onset of electricity – the big gains arising from steam had all been made yet and the benefits of electrification had not been felt, such that firms did not have a technological advantage encouraging investment, growth and expansion or face the threat of being left behind.

So far, there is limited evidence of new technologies like the mobile internet, artificial intelligence and mass automation transforming productivity. Broadbent believes it is simply too soon, but that given time and further technological progress, we could see these technologies having a transformational impact.
MetalMiner’s Annual Outlook provides 2018 buying strategies for carbon steel
Let’s hope so. Combined with the impact on traditional manufacturing jobs that globalization has had in mature markets and the growing disparity in incomes during this century, populist politics could have a destabilizing effect on Western societies, which will only be encouraged by a prolonged period of flat, or worse, negative growth in standards of living.