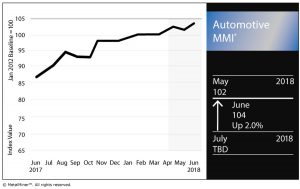 Sales in the U.S. bounced back in May after a slower April.
According to the New York Times, May auto sales jumped 2%, driven in part by a boost in Memorial Day weekend sales.
Fiat Chrysler’s sales rose 11% on the month, while Ford’s rose 0.7%, according to the report. According to a Ford release, F-Series sales in May were up 11.3%, boasting its best May since 2000.
While General Motors no longer reports sales on a monthly basis (instead now opting to report quarterly), industry experts estimate a 10% increase in sales for GM in May, according to the NYT report.

Meanwhile, sales in Canada dropped in May, according to Reuters.
Canadian automotive sales fell 0.7% last month. However, Canadian consumers, like their American counterparts, continue to show an affinity for the light truck. Canadian sales of light trucks rose 4% and accounted for 69% of total sales.

Elsewhere, Japanese automaker Honda has not been having a great time in the Chinese market this year.
Honda’s sales in the world’s largest automotive market dropped for a fourth straight month in May, according to Reuters, falling by 15.3%.
For the year to date (through May), Honda’s sales in the country are down 6.5%.

Last month during a brief window in which it seemed the U.S. and China had reached somewhat of a truce in trade talks, it was announced that China will reduce its automotive import tariff from 25% to 15%, Bloomberg reported.
In the same policy sphere, the U.S. announced it launched an investigation of auto imports, again using Section 232 of the Trade Expansion Act of 1962.
“There is evidence suggesting that, for decades, imports from abroad have eroded our domestic auto industry,” Secretary of Commerce Wilbur Ross said in a release. “The Department of Commerce will conduct a thorough, fair, and transparent investigation into whether such imports are weakening our internal economy and may impair the national security.”
According to the Commerce Department, in the past two decades, imported vehicles have increased as a percentage of total sales from 32% to 48%.
The Commerce Department also announced it would hold public hearings in July on the issue of automotive imports.