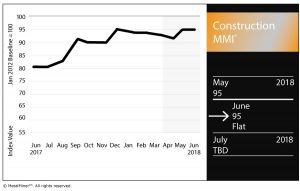 Billings have been enjoying a solid run, a run that continued in April, according to the Architecture Billings Index (ABI), which is put out monthly by the American Institute of Architects.
The ABI for April hit 52, signifying billings growth (a reading of 50 means no growth, with anything greater signaling billings growth). The April reading marked the seventh straight month of positive billings growth, according to the ABI report.
“Growth rates for billings, inquiries, and new design contracts are basically keeping pace with 2017, so architecture firms should see another solid year of business activity,” the report states.
Generally healthy employment levels could also be specifically seen in the construction sector, as the industry has added more than 100,000 payroll positions in the year to date, according to the ABI report. In 2017, the sector saw the addition of 250,000 payroll positions.
Broken down by region, the West had the strongest month, posting an ABI of 55.1. The West region was followed by: the South (51.8), Northeast (50.3) and Midwest (49.6).

The need to improve and maintain infrastructure is often considered the most bipartisan of goals — after all, everyone hates potholes.
As a presidential candidate, Donald Trump campaigned on the promise of infrastructure spending. As president, earlier this year he touted his $1.5 trillion infrastructure plan (which later actually came out to be about $1.7 trillion). The plan, which was released in February, was to include $200 billion in federal spending and sought public-private partnerships.
But those plans seem to have hit a roadblock, and seem unlikely to happen this year.