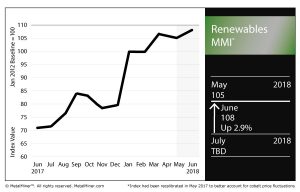 Last month, the U.S. Department of the Interior published a finalized list of 35 minerals deemed to be critical to the U.S.’s national security and economy.
The list matches a draft list released earlier in the year. With respect to our Renewables MMI, cobalt, unsurprisingly, made the list.
The full list of minerals can be found here.

Speaking of cobalt, China has its eyes on cobalt and lithium supplies, according to a report in the South China Morning Post.
The materials are coveted for their application in electric vehicle batteries. According to the report, however, securing supplies of cobalt will prove to be more challenging than for lithium.
Met with the reality of burgeoning cobalt demand (expected to rise to 300,000 tons by 2030, according to an International Energy Agency report cited by the Post), that could lead to a procurement problem and even higher prices (which are already soaring).

By now, you’ve probably heard that the U.S. allowed the temporary exemptions from its steel and aluminum tariffs to expire for the E.U., Canada and Mexico.
Unsurprisingly, the trio was not exactly happy about the news, and announcements of retaliatory efforts weren’t far behind.
For example, Mexico announced it would impose new tariffs on the U.S., including on an array of steel products. Included on the list was steel plate, according to an NPR report.
Meanwhile, Liam Fox, the U.K.’s international trade secretary, called the tariffs illegal, according to a BBC report.
Fox, like officials in other countries subjected to the tariffs, questioned the national security argument underpinning the U.S.’s trade measures, and said the U.K. is still working to secure exemptions, the BBC reported.
MetalMiner’s Annual Outlook provides 2018 buying strategies for carbon steel