After a sharp run up from the middle last year, the oil price is hovering below U.S. $80 per barrel.  The market is finely balanced in terms of threats to supply and still has robust demand growth.
Need buying strategies for steel? Try two free months of MetalMiner’s Outlook
Capacity cuts implemented by Russia, OPEC and a number of non-OPEC countries have successfully brought excess supply under control and reduced inventory. As a result, the oil price has risen with the expectation that the cartel will continue to restrict output into 2019.
So far, all significant producers appear on board with that position. The International Energy Agency (IEA) says the market is broadly balanced, with further price increases unlikely to be as significant as those of the previous 12 months.
The oil market still faces serious supply risks from the potential losses in Venezuela and Iran, the International Energy Agency (IEA) said in a new report, with only the U.S. continuing to add output. The IEA sees non-OPEC supply growing by 2 million barrels per day in 2018, followed by another jump of 1.7 million barrels per day in 2019, OilPrice.com reports; the U.S. makes up three- fourths of both of those figures, despite severe pipeline restrictions in Texas hampering development.
Growing U.S. output, though, is barely making up for declines in Venezuela, which the report describes as “catastrophic,” and potential loss of Iranian supply if sanctions are reimposed further (thus tightening the market).
So far, Russia and Saudi Arabia are not willing to increase output to dampen price rises. President Trump’s tweets this week about the oil price already being too high should be seen as an attempt to pressure OPEC to increase output to cap prices.
Interestingly, The New York Times sees the current failure of the oil price to break through $80 as evidence that the U.S., Russia and Saudi Arabia are already working behind the scenes to increase output and cap further rises. Whether that is true is unclear — judging by the president’s tweets, it’s probably not being done in any concerted or coordinated manner. 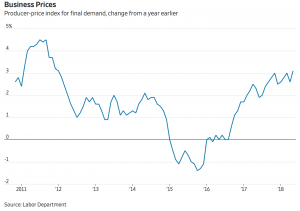 President Trump’s comments over the oil price aren’t altruistic concern for consumers; rising oil prices have added to inflationary pressures in the U.S. The Wall Street Journal reports oil price rises have contributed to a number of factors forcing up consumer prices and encouraging the Fed to consider four rate hikes this year. Even though the WTI $10 discount to Brent leaves U.S. consumers at an advantage to the rest of the world, costs are still rising this year.
The president not unreasonably does not see any need for further oil price rises. While the demand market is growing, there is plenty of capacity to meet it if producers allow it; but for various reasons, OPEC is keen to see higher prices. For Saudi Arabia, it’s because of budget deficits and maximizing the value of the upcoming Aramco float. For most other OPEC members, it’s to make up state budgets requiring close on $100 per barrel to balance the books.
MetalMiner’s Annual Outlook provides 2018 buying strategies for carbon steel
At under $80, there is clearly more incentive for producers to continue restrictions and push for higher prices. However, unexpected supply-side disruption excepted, the probability is they will be disappointed — at least in the short term — as prices show little inclination to drive higher.