Home | Metal Prices | Copper Has Had a Good Run — But Where Does it Go From Here?
Market Analysis

Copper Has Had a Good Run — But Where Does it Go From Here?

Copper has been on a good run, you say?

It has been drifting down for much of the first quarter and it has only been the scare of a strike at Escondida that has returned prices to levels last seen at the start of the year. 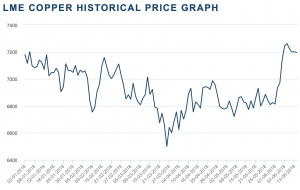 That is good in the sense that despite a persistent deficit market narrative around copper for the last few years, the reality is the copper market is pretty much balanced, according to Reuters.

Figures are approximations at best, in part because figures out of China are notoriously unreliable and partly because global copper supply is made up of two parts – primary, which at least outside of China can be estimated quite well, and scrap, which is an opaque market at the best of times.

When the copper price was low in 2015-16, copper scrap was hoarded, both intentionally and through lack of interest. But as the price hit highs of $7,300 per ton last December, that store was drawn onto the market, causing a surge in supply.

According to ICSG data quoted by Reuters, refined output actually fell slightly in 2017. Scrap, however, has made up the shortfall. According to the ICSG copper supply and demand were almost evenly matched in the last quarter of 2017, a situation that has probably moved into surplus with greater scrap supply this year.

Investors rushing for the exit in the form of mass dumping of long positions since the end of last year signals just how significant the perceived turnaround in copper’s fortunes has been. Year-end positions were in the region of 100,000 contracts but stand at just under 4,000 contracts now. Meanwhile, global inventories have surged, with 348,000 tons added across the three global exchanges (LME, CME, SHFE), according to Reuters. At a cumulative 889,000 tons at the end of March, exchange inventory was at its highest since 2003, the news source reports.

Under the circumstances, the copper price has held up rather well.

The narrative of strong global growth only recently took a knock from slower Chinese growth following a crackdown on debt in Asia’s largest economy, despite the fact copper imports – both refined and unrefined – have held up well this year.

So, is copper ripe for a correction? No, probably not — the market is balanced and threats to supply remain the most significant dynamic, but a return to a bull run is looking unlikely.

Consumers can probably look for a settlement in Chile to herald an easing in prices rather than a collapse.