The Construction Monthly Metals Index (MMI) dropped two points, falling for a reading of 93 this month. 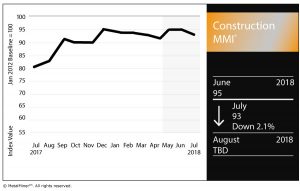 May construction spending rose 0.4% compared with the revised final estimate for April, according to Census Bureau data released this week.

The May spending estimate greatly exceeded the May 2017 total, rising 4.5% year over year.

Meanwhile, through the first five months of the year, spending increased 4.3% compared with the January-May period in 2017.

The Architecture Billings Index (ABI), put out monthly by the American Institute of Architects, once again showed growth in May.

“Slightly more firms reported an increase in firm billings than in April, and May also marked the eighth consecutive month of billings growth,” the May ABI report states. “Inquiries into new projects and value of new design contracts also continued to grow at a steady pace, indicating ongoing interest from clients in starting new projects.”