The Automotive Monthly Metals Index (MMI) fell one point this month for a July reading of 103. 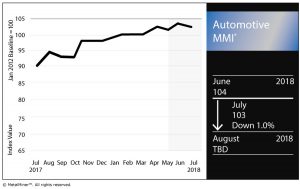 Nonetheless, June was a good month for the top U.S. automakers.

“Customers are buying with confidence because the economy is strong and they expect it to remain strong,” said Kurt McNeil, U.S. vice president of sales operations. “GM is in a fantastic position with so many new crossovers at all four of our brands, the industry’s only three-truck pickup strategy and clear leadership in large SUVs.”

Fiat Chrysler boasted an 8% year-over-year increase in June sales, marking its best June for retail sales since 2004. The automaker’s Jeep and Ram Truck brands led the way, with sales increases of 19% and 6%, respectively.

As readers might recall, the U.S. Department of Commerce once again invoked Section 232 of the Trade Expansion Act of 1962, this time to investigate imports of automobile and automotive parts. The DOC launched the investigation in late May.

During a Senate Finance Committee hearing June 20, Commerce Secretary Wilbur Ross could not offer much in the way of specifics related to the investigation, claiming it was still too early in the process to make statements about what could happen vis-a-vis tariffs.

Hearings on the Section 232 probe are scheduled for later this month. As part of the process, interested parties could submit public comments for consideration; more than 2,300 comments were submitted.

Unsurprisingly, GM and other automakers submitted comments asking the administration to decide against imposing tariffs.

“If import tariffs on automobiles are not tailored to specifically advance the objectives of the economic and national security goals of the United States, increased import tariffs could lead to a smaller GM, a reduced presence at home and abroad for this iconic American company, and risk less—not more—U.S. jobs,” GM’s comment reads. “The threat of steep tariffs on vehicle and auto component imports risks undermining GM’s competitiveness against foreign auto producers by erecting broad brush trade barriers that increase our global costs, remove a key means of competing with manufacturers in lower-wage countries, and promote a trade environment in which we could be retaliated against in other markets.”

In response, the European Union has threatened to impose an additional $300 billion in tariffs on U.S. goods should the Trump administration elect to slap duties on auto imports, calling the potential auto tariffs a “tax on the American people,” The Guardian reported.

MetalMiner’s Stuart Burns earlier this week offered his commentary on the situation and, in his view, the negative impact tariffs would have on the market.

“Automotive manufacturers are not going to rush to build new production facilities in the U.S. in the short term, but if tariffs become a permanent feature then it’s likely to encourage the car industry to accelerate the shift towards regional production,” he wrote. “Those with scale will cope better and as such we could see further consolidation in the sector if tariffs become a permanent feature — not just in the U.S., but internationally, as trading partners retaliate against U.S. action.”

PREVIOUS POST:
A Fourth of July Review: Top Posts of 2018 at the Halfway Point
NEXT POST:
Construction MMI: U.S. Construction Spending Up 0.4% in May