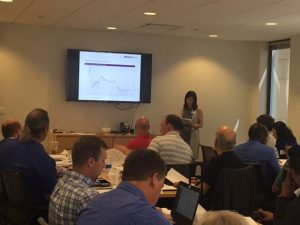 MetalMiner® hosted its annual Budgeting Workshop on Wednesday, July 25, in Chicago, during which Executive Editor/Co-founder Lisa Reisman, Procurement Forecast Analyst Irene Martinez Canorea and Co-founder/Editor-at-large Stuart Burns shared their expertise on various metals markets and thought processes for procurers to consider as they attempt to lower their metals spend.

Metals procurers attended the workshop looking for answers, with many stating that, unsurprisingly, this year’s escalation of trade tensions — particularly in the form of tariffs — has complicated things for them.

Reisman first broke down the components of an individual metal price, explaining that 40% of the price is attributable to overlying commodities and 30% to industrial metals.

“Despite the recent downtrend that industrial metals have shown, we at MetalMiner still remain bullish,” she said. “We have not — and this is different from some of the analysts that have actually called a bear market right now — we still have not shifted into a bear market. We think we are in a bullish mood and this is a correction.”

She added that rises in aluminum, copper and lead price rises in 2017 did not come as a surprise.

“We were able to advise, we gave the signal ‘Hey, we think markets are going up,'” she said. “We actually gave our long-term buy signal on aluminum in August of last year and we said to buy forward in a nine-month buy.

“We say nine-month buy, but obviously every company has to adapt that to their strategy.”

Of course, other factors come into play. For example, with respect to aluminum, the market went into a frenzy in April on the heels of U.S. sanctions against Russian firms and their owners (including Oleg Deripaska and aluminum giant Rusal).

“The whole aluminum market went into shock,” Burns said. “Prices skyrocketed and you’ve got this spike in pricing — that has nearly worked its way out of the market. As it’s worked its way out, prices have come back down again back to where we were at the beginning of April.”

Speaking of geopolitical activity, the rise of trade remedies in the form of tariffs has been a complicating factor.

In the U.S., those tariffs have come to be primarily via three statutes: Section 201, Section 232 (used to deploy the steel and aluminum tariffs) and Section 301 (currently being used to target Chinese imports, in response to U.S. allegations of intellectual property theft and unfair business practices on China’s part).

With respect to steel, Reisman explained that it was somewhat of a surprise to many around the world that the tariff would be applied universally (although quotas were eventually negotiated for South Korea, Argentina and Brazil).

As for Section 301, under the purview of the Office of the United States Trade Representative (USTR), a 25% tariff on $34 billion worth of goods went into effect earlier this month. In addition, last week the USTR held public hearings regarding an additional $16 billion. On top of all that, President Trump directed USTR Robert Lighthizer to draw up a list of an additional $200 billion worth in products, which would be hit with a 10% tariff. That list will also undergo a review process, with public hearings scheduled for Aug. 20-23.

So, for now, Reisman advised the procurers in the room to make sure to monitor and manage the two tranches of tariffs totaling $50 billion (the $34 billion already in place and the $16 billion under review).

Reisman, in explaining how MetalMiner looks at markets, took the time to do some mythbusting on various subjects.

For example, the cost of raw materials like iron ore, coking coal and scrap are tracked closely by many companies; however, she said raw materials are highly irrelevant to MetalMiner’s forecasting.

“There’s no correlation between a rising price market and what those raw materials are doing,” she said. “The correlation breaks down.”

Meanwhile, Burns addressed the forward price curve and why it is not a good predictor of where metals prices are going to go.

“The forward price is actually a reflection of the cost of buying that metal today at stock price, holding it for three months or six months, paying the warehouse fees and insurance … if you like, it’s the premium the consumer has to pay to insure that they get a fixed price in the future — it’s an insurance policy. There’s no relevance of where the market will be in six months’ time.”

In addition to a review of the state of individual metals markets — as seen in MetalMiner’s Monthly Metals Outlook report — the MetalMiner experts delved into three main factors driving long-term forecast thinking: oil, China and the U.S. dollar.

The dollar has recovered somewhat, buoyed by a two-month uptrend, but remains in a long-term downtrend. Historically, commodities and the dollar are inversely related (although 2017 featured some anomalies that bucked that historical trend).

“We’re not calling the dollar bullish yet,” Reisman said. “If we were to see the dollar … shoot up, that’s when we might change our point of view and say the dollar is bullish.” She added tariffs and sanctions could have further impacts on the dollar, which remain to be seen as those actions play out.

Of the three factors, oil is particularly interesting right now.

“Higher crude oil prices, generally speaking, support higher metal prices,” she said. “That correlation is super important to be watching. If you suddenly see oil tanking, that could be a precursor to a falling metals market.

“As long as oil prices are over that $60/barrel level, buying organizations can continue to expect higher crude oil prices.”

In short: pay attention to oil.

“Oil should be on something on everybody’s radar if you’re a metal buyer, for sure,” Reisman said. “It tells you a lot.”

On a macroscopic level, Reisman concluded with some things that could make things go crazy and possibly yield a shift away from the generally bullish state of markets.

One example, she noted, is the potential imposition of the aforementioned $200 billion in tariffs, not to mention the imposition of any other tariffs in the future.

On the other hand, if any of these trade actions get reversed in some form or fashion, that will also have an impact.

“If Canada, Mexico and the E.U. are exempt from tariffs, that also is going to change the game significantly,” she said. “It’s not even a black swan but it will impact the price, we know that for sure.”