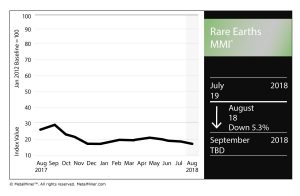 Much has been said about the rise of trade tensions around the world, particularly between the U.S. and China.
Those tensions began to manifest in the form of the Trump administration’s steel and aluminum tariffs this past spring, which, in addition to China, have affected U.S. allies.
But what about the impact of trade conflict on rare-earth metals, a market overwhelmingly dominated by China (at approximately 90%, according to most industry estimates)?
The U.S. is threatening a potential additional $200 billion in tariffs on Chinese imports (on top of the previously announced $50 billion, of which $34 billion has already gone into effect), while China has indicated it is prepared to respond in kind.
But, as The New York Times reported last month, China could strike back in other ways, too, including disruption of supply chains that depend on rare earth metals for an end product (e.g. smartphones).
As the report notes, some rare-earths metals appeared on the Section 301 product list drawn up by U.S. Trade Representative Robert Lighthizer at President Trump’s direction.
Those metals and related compounds included:

With very little in the way of alternative supplies — that is, supplies of rare earths outside of China — the end result could simply be that U.S. companies will have no choice but to pay more for the metals, as an editorial in the South China Morning Post explains.
China’s dominance in the market and concerns over that fact are nothing new, nor is the situation likely to change anytime soon.
As the U.S. Geological Survey (USGS) noted earlier this year, rare earths were not mined in the U.S. at all in 2017. According to USGS, the estimated value of rare-earth compounds and metals imported by the U.S. in 2017 was $150 million, up from $118 million in 2016. According to USGS, the distribution of rare-earths imports by end use was as follows: catalysts, 55%; ceramics and glass, 15%; metallurgical applications and alloys, 10%; polishing, 5%; and other, 15%.

Despite China’s dominance in the rare-earths sector, that hasn’t stopped business interests from probing for new sources around the world.
Within the U.S., Alaska is one such place considered potentially viable for rare-earth mining.
Alaska Sen. Lisa Murkowski, who chairs the Energy and Natural Resources Committee, expressed concerns during a July hearing on the issue of China’s dominance of the market and the impact of potential tariffs.

“My concern, among many concerns, is if China ultimately responds to tariffs by restricting our supply of rare earths, or any number of other minerals, the U.S. could be in serious trouble. We’ve heard testimony in the past about the dangers of the concentration of supply from a handful of countries that control the supply chain,” she said, as quoted by the Anchorage Daily News. “I’m hopeful that we aren’t about to experience those dangers firsthand and will continue to urge action to reduce this significant vulnerability.”

As the report notes, at the current stage, much work remains to be done before assessing the viability of rare-earth mining in the state, including the Bokan Mountain prospect, considered to be the most promising of Alaskan sites, per the report. But availability and viability are two different things; particularly in light of the specter of potential tariffs, it is certainly worth keeping an eye on developments in rare-earth mining efforts in The Last Frontier.