According to the Financial Times, the index tracking the U.S. dollar was down 0.3% at 95.606, its lowest since early August. The drop cut its year-to-date gain to just under 4% and prompted a modest rally in commodities, which have been depressed by a persistently strengthening dollar.

This graph from the Financial Times shows the relatively benign bounce after a marked period of strengthening: 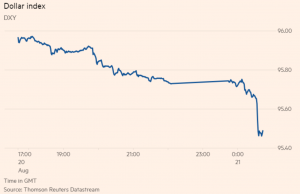 The president poured cold water on the prospects for a deal from the upcoming talks, but that may have been a calculated step to apply pressure to the other side to come to the table willing to compromise.

Talk of a meeting between Trump and Chinese President Xi Jinping in November is, at this stage, highly speculative and will depend on compromises being made on both sides — something Trump appears in no mood to make. He seems to feel the U.S. holds all the cards, and indeed from a trade balance point of view, an escalation of sanctions would likely hurt China more significantly than the U.S.

There is likely to be more currency-influencing news this week, with the minutes of the latest Fed meeting due to be released on Wednesday and opening speeches at Jackson Hole due later this week.

In China, the Shanghai stock market is down about 20% this year, reflecting worries the economy was slowing before the tariffs were applied — a situation that is deteriorating as the weeks go by and the rhetoric is ramped up.