Oil prices have been quietly rising for the last six weeks.

The Brent crude benchmark has now breached the U.S. $80/barrel level to $81.20 this week, a level not seen since late 2014, the Financial Times reports.

In the U.S., ample shale oil supply and constrained infrastructure remains a drag on the West Texas Intermediate price, the U.S. marker, but it still increased $1.30 a barrel in New York to close at $72.08 this week — its highest level since July, according to the Financial Times. 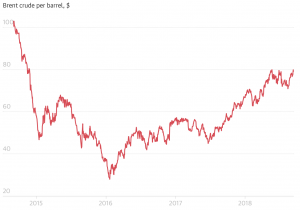 Despite tweets of protest from President Donald Trump, OPEC and non-OPEC producers meeting in Algeria at the weekend did not see any reason to increase output, saying high pump prices were down to refinery issues rather than the crude oil price.

They may, up to a point, be right, although hard data supporting this case is hard to come by.

Refined petrol prices at the gas pump are near all-time highs. In the U.K., motorists are paying up to £1.40/liter, or U.S. $7/gallon. Refiners are investing in upgrading plants, often a sign margins are strong and utilization rates are high. Gas pump prices have hit levels not seen since the oil price was significantly north of U.S. $100/barrel, but crude demand is robust and geopolitical issues have also played a part in the rising crude price.

A combination of supply disruption from Libya, a collapse in Venezuelan output and the imminent sanctions on Iran have combined to spook markets into believing there will be acute shortages.

CNBC quotes sources postulating “There is an increasing consensus view that supplies are going to get tight toward the end of the year. It’s almost silly season. People are talking about $100 a barrel. People are making comparison to 2007/2008. There’s no real spare capacity. We’re very vulnerable and there’s no making up Iranian barrels.” Trader Trafigura is among those predicting Brent crude prices above U.S. $100/barrel in Q1.

OPEC’s reticence in raising output may be tempered in the medium term by a desire to limit the growth of non-OPEC sources of supply.

As they saw with U.S. frackers, high oil prices encouraged innovation and investment that has now firmly established fracking as a serious competitor to OPEC sources.

OPEC predicts world oil production will soar to new records over the next five years, as a dramatic expansion in demand from airlines offsets the arrival of electric cars. In its annual report, it predicts most of the production increase will come from countries outside OPEC, led by the tight oil frackers in the United States, with China and India leading the increase in demand.

The oil producers club expects global oil demand to reach nearly 112 million barrels per day by 2040, driven by transportation and petrochemicals. That is up from almost 100 million today and higher than last year’s projection. Significantly higher prices would encourage investment in offshore deep water and non-U.S. fracking projects, both of which have cooled since the oil price fell in 2015-2016.

That dynamic alone may encourage OPEC to increase output in the New Year, although, for now, it will be keen not to be seen to be playing to the president’s tune.