MetalMiner’s precious metals index, tracking a basket of platinum, palladium, gold and silver prices in several geographies across the globe, bounced back in October after several months of declines.

The Global Precious Monthly Metals Index (MMI) registered a value of 83 for its October 2018 reading, up 2.5% from 81 last month, stanching the bleeding — last month’s level had not been seen since January 2017. 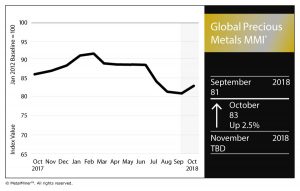 The U.S. platinum bar price had its own bounceback after having dropped last month. Platinum rose to $814 per ounce, up from $777 per ounce in September. However, U.S. palladium bar built up a two-month upward price trend by breaking the $1,000 per ounce level for the first time in eight months, rising to $1,070 per ounce.

This extends palladium’s historic premium to platinum for yet another month.

John Dizard, writing in the Financial Times, contends that platinum’s once-cheaper cousin is ripe for the bubble it seems to be creating.

“The best investment bubble propositions incorporate the familiar and the incomprehensible,” he writes.

The largest single application for palladium, as MetalMiner readers well know by now, is to help convert toxic gases within catalytic converters. “Therefore, we have something familiar to investors (cars) and something incomprehensible (the physical chemistry of catalytic converters) — perfect conditions for a bubble,” Dizard concludes.

Much of the bubble conditions can be explained by “Dieselgate” — read about it in the full article (paywall) — but speaking of palladium bar prices, as we were just a bit ago, those aren’t what auto buyers should really be tracking: sponge is where it’s at.

“Could it be that the automakers will run into a supply squeeze and be forced to buy palladium bars of the sort represented by Nymex futures? Not exactly,” Dizard writes. “The automakers actually buy a semi-manufactured product called ‘sponge’, which is palladium (or platinum) particles used to coat a ceramic matrix inside the emissions system. There is a separate, over-the-counter market for palladium sponge.”

Ultimately, “if you follow the quotes for palladium sponge, you can see whether the ‘sponge premium’ over the price of bar metal indicates a real shortage of the industrial product,” according to Dizard.

We recently came across a recent white paper entitled Illegal mining in South America and financial risk – Taking the shine off gold, co-authored by Jesse Spiro and Brian Huerbsch.

Evidently, the promise of huge profits based on higher gold prices – and fueled by rampant corruption — have created a continentwide supply chain problem. According to the authors, the issue plagues Colombia, Peru, Bolivia, Brazil, Ecuador and Venezuela.

The core of the problem is a major risk for gold-buying organizations — the ongoing threat of murky supply chain traceability.

You’ll be able to read more about it, including our breakdown of what gold-buying companies should do to mitigate risk, later this week on our sister site, Spend Matters.