Readers in North America can be excused for puzzling why Europeans worry overly about the so-called “Eurozone crisis.”
Need buying strategies for steel? Request your two-month free trial of MetalMiner’s Outlook
They seem to come around periodically. There is a great deal of noise and some volatility in the stock markets, but eventually — whether it is Greece, Spain, Portugal, Ireland, or a combination of several economies — the E.U. seems to have muddled through such crises over the last decade.
Even Brexit is confining its impact to the U.K. economy and has largely left the rest of the E.U. unaffected. But Italy’s latest budget proposals hold the potential for serious disruption, not least because it is the Eurozone’s third-largest economy and a founding member of the trade agreement started in the years after World War II — so its impact is proportionately significant.
So, what is the problem this time, you may ask?
Well, Europe has been slow to recover from the financial crisis of 2008. Debt ballooned in many countries and under the constraints of a fixed currency managed to the advantage of rich northern states like Germany, balance of payments deteriorated as the north imposed austerity on the south (or so many southern states saw it).
The rights or wrongs of the Eurozone’s structure aside, countries like Italy have been constrained for the last decade by fiscal rules set in Brussels. The Italian economy has lagged behind the rest of Europe — unemployment is high and growth is low. As the graphs below courtesy of Stratfor illustrate, the populace has had enough. 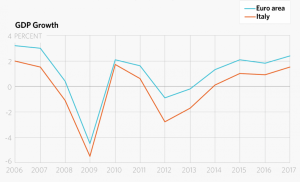 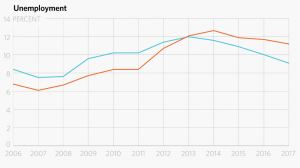 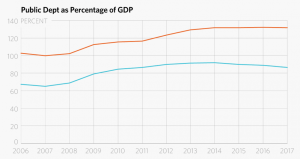 Earlier this year, they even surprised themselves by voting in a populist coalition on a platform of radical reform and reflation. That is a policy that puts them at loggerheads with Brussels, which has demanded an Italian deficit reduction that should see the deficit grow by just 0.6%, down from an expected 1.6%, to be achieved by increased austerity measures.
Italy’s new government, a coalition of the Five Star Movement and the League, have presented Brussels with a budget that would see the deficit rise to 2.4% next year, three times higher than an E.U.-mandated target and which Barclay’s Bank is quoted as predicting in The Telegraph will likely exceed 3%, even without a global economic downturn next year.
Italian 10-year debt yields have surged as a result, up near 300 points, not quite at the 400 level seen in the crisis of 2011 but a record four-year high. So far they are only talking about the budget, but nothing has been implemented. After years of QE, banks are holding some €387 billion (U.S. $444 billion) of state debt.
As The Telegraph report observes, banks face mark-to-market losses as yields rise. This erodes their capital buffers, forcing them to curtail lending and further crimping growth. Or, they might have to sell some of their bonds, creating pressure for yields to rise higher.
Either action can quickly turn into a self-feeding “doom-loop,” the paper suggests, as the banks and the sovereign state take each other down.
There is not going to be an Italian sovereign default. Although there are reports of capital flight to Switzerland, it is very unlikely there will be a run on Italian banks as there was in Greece.
However, Italy’s sheer size and core membership of the Euro means Brussels and Rome cannot allow the current standoff to escalate out of control.
Like a runaway super tanker, the situation cannot be easily contained like it was in Greece if the markets genuinely take fright.
You have to have some sympathy for Italy. State spending has always played a massive part in keeping a country together, where geography, history and culture constantly try to tear it apart, a report by Stratfor observed.
Reports of riots in Rome over the appalling state of public services underlines the popular will for public investment, regardless of austerity measures demanded by Brussels. So far, the government has a clear popular mandate to ignore Brussels and go for debt-fueled growth.
Brussels, likewise, is equally set against allowing Italy to buck the rules. The two are on a collision course and set against a backdrop of slowing global growth — outside of the U.S., at least — the economics are not in either party’s favor. Global growth or risk appetite are not going to mitigate the impact of an increasingly indebted Italian economy.
MetalMiner’s Annual Outlook provides 2018 buying strategies for carbon steel
The stage is set for a potential crisis.
We are not there yet, but in an increasingly nervous investment climate, it could prove a factor in a wider global stock market fall and global retrenchment.