The Construction Monthly Metals Index (MMI) fell seven points, down to a December MMI reading of 82. 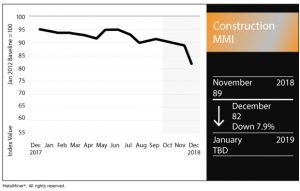 Estimated U.S construction spending in October fell 0.1% from September according to Census Bureau data, but marked a 4.9% increase from the October 2017 spending total.

As for private construction, spending was at a seasonally adjusted annual rate of $998.7 billion, down 0.4% from the revised September estimate of $1,003.0 billion.

The Architecture Billings Index (ABI), put out monthly by the American Institute of Architects, reached a value of 50.4 for October, down from 51.1 in September. A reading of 50 indicates no growth, with anything greater signifying growth.

“Although growth is still occurring, the pace of that growth has continued to ebb and flow through much of the year,” the ABI report states. “But the outlook still remains positive, as inquiries into new work remain strong, and the value of new signed design contracts remains relatively strong as well.”

“Regionally, conditions look to be changing from the trends that have dominated so far this year,” the report states. “Billings at firms in the Northeast rebounded modestly in October, following several months of softness, while billings declined at firms located in the South and West, where conditions have been strong recently. However, it is too early to say if this is a one-month blip or a more protracted change.”

PREVIOUS POST:
This Morning in Metals: Teck Resources Teams Up With Sumitomo on Chilean Mine Expansion
NEXT POST:
A Novel Approach to Predicting Price Direction