Home | Macroeconomics | Is a European Recession Underway? Not Yet, but Growth is Slowing
Market Analysis

Is a European Recession Underway? Not Yet, but Growth is Slowing

Everything in the garden may look rosy from the U.S., but there is no doubt that the global economy is slowing.

Recent data from Germany suggests the engine of the European Union is suffering as much as anyone.

Even peeling away the more sensationalist rhetoric, the figures do not looking encouraging.

But this wasn’t a one-month aberration.

German industrial production fell by 3.2% over the second half of last year, the sharpest contraction since the Lehman crisis, the article reports, with manufacturing orders down 7% in January from a year earlier. The economy has been hit by a downturn in China, East Asia and Turkey — all major trading partners – with the malaise spreading from autos to construction, chemicals and the pharmaceutical sectors. The stock market is down and German GDP contracted 0.8% in the third quarter. 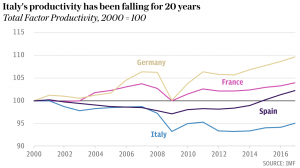 Meanwhile, in Italy, Europe’s latest problem child, is struggling to balance the aspirations of the populist governing coalition of Lega/Five star, with structural long-term problems in the economy.

The article quotes some really astonishing details. According to the IMF, productivity levels in Italy’s non-tradable sector has fallen by 16% since 1966, while per-capita income has dropped by 4% over the last two decades.

The workforce is contracting at an alarming pace, with almost 160,000 people leaving the country each year. Meanwhile, the country is struggling to finance the rollover of some €400 billion euros of debt in 2019, which is twice the entire GDP of Greece, the article notes.

So far, markets have been relatively sanguine about Italy’s GDP to debt, with 10-year bonds only trading at a 286-point premium, but the Lega/Five Star coalition has shown it has scant love of Brussels-imposed limits on spending and, in the face of popular demand, it may yet try to spend its way out of trouble. 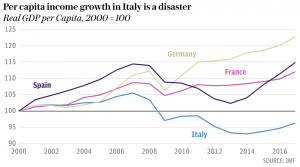 Apparently, some economists say the only way to break out of this perennial trap is for Italy to leave the euro, devalue by 30 pc, and restructure its debts. However, so far there appears to be little appetite in Italy to leave the Euro, despite the constriction membership has imposed on the economy for the last two decades.

The E.U. has little room for monetary stimulus, with interest rates at -0.4% and an end called to its bond buying QE. Germany could do a mini-China and splurge on much-needed infrastructure spending, but as The Telegraph notes, with so many legal debt brakes in the government finances, quite how they would finance such a boost is hard to see.

Under the circumstances, slower European growth seems an almost certainty in 2019, and even the European Commission’s recently revised prediction — from 1.9% growth for 2019 made in the fall to 1.3% just recently — may prove implausibly optimistic by the end of 2019.