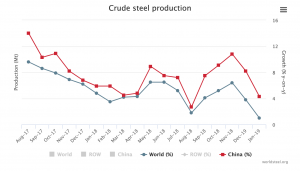 Crude steel production growth for China (in red) and the world. Source: worldsteel.org

As usual, China led the way in crude steel production, churning out 75.0 MT, marking a year-over-year increase of 4.3%. India, which recently passed Japan as the world’s second-largest steel producer, produced 9.2 MT, which was down 1.9% year over year. The country India passed in the steel production standings, Japan, saw its production fall 9.8% to 8.1 MT, while South Korea’s production fell 1.5% to 6.2 MT.

The U.S. produced 7.6 MT in January 2019, marking an 11.0% year-over-year increase. U.S. steel mills continue to fill an incrementally larger share of total capacity. According to the American Iron and Steel Institute, U.S. steel mills churned out steel at a capacity utilization rate of 80.9% through Feb. 23 of this year, up from 75.7% for the same period in 2018.

Turkey’s steel sector continues to face challenges, with 2.6 MT in January marking a 19.5% year-over-year decline. Turkey’s steel remains subject to the U.S.’s Section 232 steel tariff, which the Trump administration increased to 50% from 25% last year amid diplomatic tensions. In addition, another Turkish export market, the E.U., recently imposed new steel safeguards in an effort to curb diverted steel supplies (which it sees as an outcome of the U.S.’s Section 232 action).