The Automotive Monthly Metals Index (MMI) picked up one point this month, rising for an MMI value of 93. 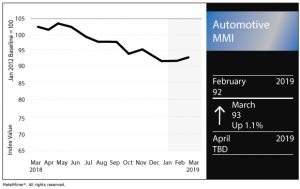 “We knew that a lot of our competitors would watch to see what our experience would be and if we’d stick to our guns,” GM spokesman Jim Cain told the Detroit Free Press. “We always expected they’d follow.”

“The overall industry is starting off slower due in part to weather, the U.S. government shutdown and concern over tax refunds,” U.S. Head of Sales Reid Bigland said. “We still see a strong, stable economy and anticipate any lost winter sales will be made up in the spring. For us, the Ram brand was the standout in February, and Jeep Cherokee set a February record as well.”

Subaru reported a 3.9% year-over-year sales increase, with its Forester performing well in the year to date (up 17.6% compared with January-February 2018 sales). However, earlier this month Subaru recalled 1.3 million vehicles due to brake light issues, impacting certain Forester, Impreza and Crosstrek vehicles.

Pursuant to Section 232 of the Trade Expansion Act of 1962, once an investigation begins the commerce secretary has 270 days by which to provide the president with a report including recommendations. This particular investigation began May 23, 2018, setting the deadline on Feb. 17.

However, some industry groups have complained because the report was not made available to the public.

“It is critical that our industry have the opportunity to review the recommendations and advise the White House on how proposed tariffs, if they are recommended, will put jobs at risk, impact consumers, and trigger a reduction in U.S. investments that could set us back decades,” the Motor and Equipment Manufacturers Association said in a prepared statement. “Secrecy around the report only increases the uncertainty and concern across the industry created by the threat of tariffs. MEMA calls for the immediate and full release of the report.”

“Imports of cars and auto parts from the EU clearly do not pose a national security risk to the United States,” ACEA Secretary General Erik Jonnaert said. “Any trade restrictive measures in our sector will have a serious negative impact, not only on EU manufacturers but also on US manufacturers.”

General Motors made waves late last year when it announced plans to close several of its North American plants and cut 15% of its workforce.

GM is far from the only automaker cutting costs and shuffling production, as MetalMiner’s Stuart Burns explained last month. Ford, Jaguar Land Rover, Nissan and Honda, among others, have either cut jobs or moved production.

“The U.S. market could be due for a severe shakeup if President Donald Trump’s threat to slap import tariffs on foreign cars comes into effect,” Burns explained.

“UBS Bank reckons that the worst case — tariffs of 25% — would see the American market shrink by 12% next year.”

As for investment, while GM previously announced the shuttering of five North American plants in 2019, it recently announced new investment in other plants. The automaker plans to invest a total of $56 million in two Michigan plants, located in Romulus and Lansing.