The Construction Monthly Metals Index (MMI) held flat for an MMI reading of 82 this month. 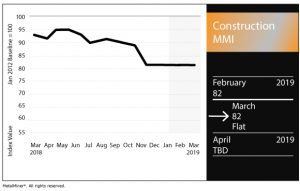 According to Census Bureau data released earlier this week, U.S. construction spending in December 2018 reached an estimated $1,292.7 billion, down 0.6% from the previous month but up 1.6% year over year.

Broken down by type, spending on private construction hit $991.2 billion, down 0.6% from November’s estimate of $997.1 billion.

According to the monthly Architecture Billings Growth Index (ABI) released by the American Institute of Architects, billings growth was strong in January.

The January ABI came in for a reading of 55.3, up from 51.0 the previous month (anything above 50.0 indicates billings growth).

The strong month comes despite the partial government shutdown that extended into late January. According to the AIA release, the January score of 55.3 was the highest ABI value in more than two years.

In addition, according to the survey results, firms with a residential specialization were slightly more likely than firms of other specializations to have been directly impacted by the shutdown.

By region, the South and Midwest posted the strongest billings growth in January. The four regions tracked in the ABI posted January values of: