Home | Commodities | The Oil Price is Down for Now, but Where is it Off to Next?
CommentaryMarket Analysis

The Oil Price is Down for Now, but Where is it Off to Next?

Oil prices are on track for their largest monthly decline in six months, the online trade journal oilprice.com writes.

The Trump administration exacerbated the selloff with another threat of tariffs, this time against its southern neighbor Mexico if it does not stem the flow of immigrants across the border. President Donald Trump threatened to apply a gradually rising tariff, starting at 5%, on goods imported from Mexico beginning June 10.

The threat was seen by investors as a negative move for both U.S. and wider region growth. The move was also seen as evidence, as if any were needed, that the president will continue to use his weapon of choice, tariffs, as a means to achieve his political ends — with negative consequences for growth.

Meanwhile, OPEC as a group and Saudi Arabia as its spokesman has reacted with assurance that the cartel will continue to limit output to further deplete inventories and keep the market in balance.

OPEC is desperate for oil prices to maintain the gains it has made this year and, if possible, reverse the decline seen during the last 30-40 days. 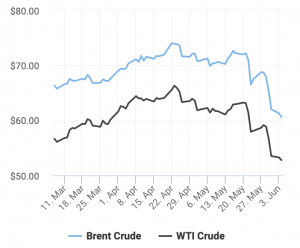 OPEC sees itself in a fight with the U.S. shale industry, worried that it is losing share with limited power to substantially support the market as it was once able.

Some consumers are hoping rising U.S. shale output will permanently consign OPEC to history — at least in terms of engineering higher pricing.

The expectation is rising U.S. output has more than made up for the loss of Libyan, Iranian, and Venezuelan output. However, according to JP Morgan Chase, the market is finely balanced with robust demand, up 5-7% in China and Europe this first quarter, with increasingly constrained supply.

Maybe in recognition of that, Trump has so far exempted Iran from sanctions on its petrochemicals industry. OPEC’s output is currently running at 30.17 million barrels per day (bpd), its lowest level in four years. This comes despite Saudi Arabia increasing output by 200,000 bpd to partially compensate for the loss of some 400,000 bpd from Iran.

Anyone holding off filling up their tanks in the hope prices will fall further may be disappointed.

Negative sentiment around trade is the order of the day, but supply is becoming tighter and demand has so far not reflected the wider slowing of global GDP.

The oil price is down, yes, but not out.