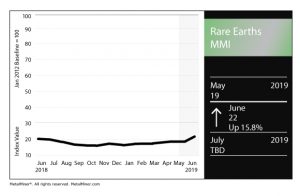 In light of last month’s developments in the long-running U.S.-China trade talks, MetalMiner’s Stuart Burns delved into what could be a big play for China.
Last year, the U.S. left rare earths off a wide-ranging list of Chinese imports to be targeted by tariffs (as part of the U.S.’s Section 301 probe), as the U.S. — and the rest of the world — depends on China for rare earths.
Last month, the U.S. raised tariffs on $200 billion in imports from China and China responded with retaliatory tariffs. On the heels of the tit-for-tat and President Xi Jinping’s recent visit to a rare earth magnet facility, some commentators are wondering if China could put the squeeze on the rare earths market.
“China is rattling the saber ever so softly to say that it may be more exposed to general trade on a balance of payments position – China exports more to the U.S. than the U.S. exports to China — but the U.S. (and the rest of the Western world, as it happens) is uniquely exposed to China’s control of not just rare earth elements, but the whole supply chain,” Burns wrote. “That supply chain includes everything from mining through refining to manufacturing of myriad components used in high-tech applications including from electric vehicles, cellphones, laptops, missiles and fighter jets.”
According to CNBC, China’s exports of rare earths dropped in May to 3,639.5 metric tons, down from 4,329 metric tons in April.
The rare earths market is notorious for its volatility; as such, it remains to be seen if the drop in exports is a calculated move or a one-off blip. As trade talks between the U.S. and China continue to take shape, market watchers will want to keep an eye on China’s export levels.

On May 30, Malaysian Prime Minister Mahathir Mohamad told reporters, with respect to the ongoing discussions regarding Australian rare earths miner Lynas Corp’s license to operate in the country, “We think we’ll have to renew the license,” according to a report in the Straits Times.
Lynas, the largest rare earths miner outside of China, has battled regulatory challenges in Malaysia related to waste disposal. Disposal of two forms of waste at the miner’s Malaysian facility has been the focus of the ongoing saga, as the miner’s license to operate in the country expires in September.
The miner has previously said it would not be able to comply with the government’s conditions vis-a-vis waste disposal in the required time frame.
“We welcome the Prime Minister’s comments acknowledging the importance of the continuation of the Lynas operations in Malaysia,” Lynas said in a prepared statement May 31. “We will update the market as we receive further clarification from the Malaysian government.”