On Thursday, two tankers carrying petrochemicals, one of which was a Japanese-owned ship, came under suspected attack in the Gulf of Oman. The incidents compounded the already simmering hostilities in what’s possibly the world’s most pivotal maritime corridor and spurred a significant 4% spike in the oil price, the Washington Post reported.

The phrase “suspected attack” takes the limits of objective reporting to an extreme — there is no doubt these incidents were attacks, particularly coming hot on the heels of four previous such incidents last month.

The question is: who was behind them?

The U.S. administration is clearly of the opinion it is Iran, by which they mean the Iranian state, the proposition being the Iranian authorities are trying to show they consider the economic pressure the U.S. is exerting to be a form of economic warfare intended to bring about regime change. That is a high-risk game with the most powerful navy in the world floating off your shores, but what is less clear is whether this is the Iranian government or a hard-line faction authorizing actions by the Iranian Revolutionary Guards, or possibly another agency at work.

Iran has denied it is behind the tanker attacks.

The U.S. argues that footage of what appears to be an IRG patrol boat removing an unexploded magnetic mine from the hull of one of the stricken tankers, the Japanese Kokuka Courageous vessel, supports the U.S.’s assertion that the IRG behind this. However, the owner of the vessel contradicted the U.S. account of how the attack occurred, the Washington Post reported.

But there are even veiled suggestions it could be Saudi Arabia trying to prompt the U.S. into an armed conflict with the Saudis’ biggest rival.

In practice, though, neither side has presented any proof as to who exactly ordered these attacks or who carried them out. There has been lots of finger pointing but no proof – yet.

Does it matter, from a metals market perspective, who is behind the attacks? Well, yes. The more likely these incidents are the direct action of the Iranian state, the more likely the U.S. will reciprocate with force, and the greater the chance of further increases in the oil price. 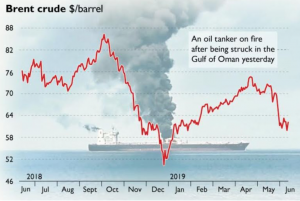 As the above graph from The Times shows, Brent crude had been moderating nicely, from a consumer’s point of view, since April.

Due to headwinds from rising U.S. oil inventories, moderating demand expectations in Asia, and uncertainty as to how robustly OPEC+ would be willing and able to continue oil output constraints, the oil price had been declining steadily. That trend, however, has reversed this week; a further escalation of tensions could see the price heading back toward $70 per barrel.

Oil analysts had expected prices to remain between $60 and $70 for the rest of the year according to a report by The Guardian, but further attacks could force prices back over $70. The Strait of Hormuz handles about one-third of global seaborne oil shipments, so any disruption there will have an impact on prices. The global economy will continue to turn, even if tensions escalate further and with non-OPEC supply likely to grow from 1.9 million barrels a day to 2.3 million next year, barring an all-out war.

The price will likely fall back sharply when this current situation is resolved – quite when and how that will be, though, remains to be seen.