The Rare Earths Monthly Metals Index (MMI) dropped one point this month for an August reading of 22. 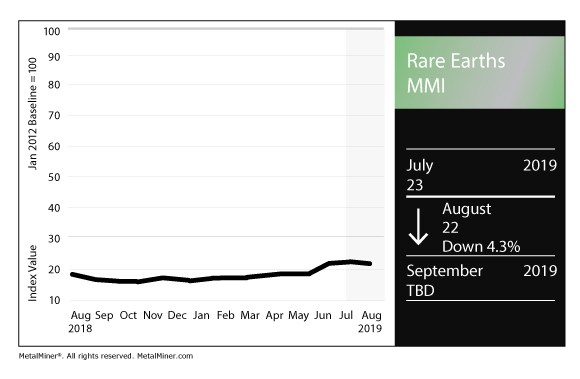 Once again, the ongoing trade talks between the U.S. and China took a turn toward further tensions recently when President Donald Trump announced the U.S. would impose a 10% tariff on an additional $300 billion in Chinese goods (effective Sept. 1).

The move would subject nearly all of the U.S.’s imports from China to duties. The proposed $300 billion tariff list includes a wide range of consumer goods, including cellphones, cheeses, jackets, shirts, jewelry and toys.

Notably missing on any of United States Trade Representative’s tariff lists to date?

The omission is not surprising given the U.S.’s reliance on China for rare earths, the latter which boasts an overwhelming dominance of the global market.

As the U.S.-China trade war has unfolded, speculation has increased regarding the potential for China to use that rare earths dominance as a weapon in trade talks with the U.S.

The Association of China Rare Earth Industry this week accused the U.S. of “bullying,” Reuters reported, adding it would support counter-measures by China to combat the U.S. tariffs.

“The cost of tariffs imposed by the United States should be borne by the U.S. market and consumers,” the association was quoted as saying.

Given the specter cast over the rare earths market by China (and possible trade-related restrictions on its rare earths exports), the ongoing saga of Australia’s Lynas Corp. in Malaysia is of particular importance.

Lynas is the largest rare earths miner outside of China. The miner has been entrenched in a battle with the Malaysian government regarding disposal of radioactive waste at its facilities in the country; the miner’s license is set to expire as of Sept. 2, 2019.

According to Reuters, however, Malaysia plans to renew Lynas’ license to operate in the country, which would preserve a key source of rare earths production outside of China. Lynas announced Wednesday that it will receive an update from the Malaysian government on the license renewal in mid-August, Reuters reported.