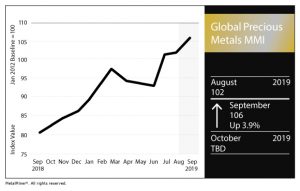 MetalMiner’s Sohrab Darabshaw delved into the Indian gold market ahead of the festival season in the country, which includes Diwali in October.
As Darabshaw explained in late August, the apparent slowdown in demand ahead of the usually busy gold-buying season comes amid surging gold prices. Citing a Yahoo Finance report, Darabshaw noted India’s gold imports in July fell a whopping 55% on a year-over-year basis.
“Almost everyone is waiting for a price correction, which is a far cry from the positive situation at the start of 2019,” Darabshaw wrote.
“Demand grew 9% from January-June this year, sparking hopes that consumption towards the latter half of the year would go up.
“But experts are of the opinion that if things do not improve soon, consumption could slump to a low of over 650 tons (comparable to the 2016 low).”
Gold-buying in India was also sluggish ahead of the holiday season last year.

A Gold Mine in Pakistan

Meanwhile, in Pakistan, MetalMiner’s Stuart Burns weighed in on the struggle between the Pakistani government and Tethyan Copper Co.
“The dispute is over the legality of Tethyan’s claim and rights to exploit the copper and gold reserve at Reko Diq in Pakistan’s remote southwest Balochistan province, close to the Iran border,” Burns wrote.
“Pakistan’s mining rights and practices, not to mention its infrastructure, are not fit for the purpose, as Tethyan’s story underlines all too well.”
The impasse benefits neither party, Burns opined.
“Tethyan has offered to negotiate a settlement, but with the Chinese on the sidelines bidding to extend their Belt and Road involvement in the region, conflicting loyalties and priorities are in play,” he wrote.
“A solution, though, would be very much in Pakistan’s interests.
“The resource is said to be the largest untouched deposit in the world, containing an estimated 2.2 billion metric tons of mineable ore that could yield 200,000 metric tons of copper and 250,000 troy ounces of gold annually for over half a century, Stratfor reports.”

While palladium remains at a significant premium to platinum, the spread between the two narrowed this past month.
After a spread of $638 per ounce as of last month’s MMI, palladium fell and platinum increased to produce a spread of $539 per ounce.
According to Kitco News, platinum is possibly riding momentum generated by other precious metals — namely gold and silver — of late. The platinum price recently approached its highest level in 16 months, Kitco News reported.