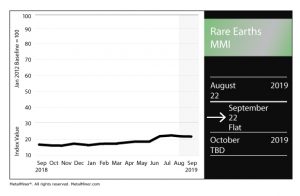 China’s dominance of the global rare earths market is well-documented, a fact the U.S. defense sector has grappled with in light of the elements’ use in a variety of high-tech capacities (including military applications).

In that vein, the Pentagon announced late last month that it has engaged talks with Australia regarding the possibility of hosting a rare earths processing plant in the country, Reuters reported.

According to the report, China accounts for more than 80% of global processing capacity of rare earths, a list of 17 elements that includes 15 lanthanide series elements (plus yttrium and scandium).

Ellen Lord, the Pentagon’s under secretary of defense for acquisition and sustainment, was quoted as saying that the U.S. is exploring several options to expand its rare earths footprint, of which Australia presented “one of the highest potential avenues,” Reuters reported.

Given the U.S. (and the rest of the world’s) dependence on China for rare earths, the U.S. has held back on imposing tariffs on the elements, even as it has levied hundreds of billions of tariffs on Chinese industrial products and ordinary consumer goods.

Lynas Corp, the Australia firm that holds the title of world’s largest rare earths producer outside of China, last month scored a victory when the Malaysian government opted to extend the miner’s license to operate in the country.

The decision came after many months of uncertainty regarding the prospects of renewal, as the Malaysian government expressed concerns about waste disposal at the firm’s operations.

Although the government extended Lynas’ license, the renewal came in at a term of six months, shorter than the usual renewal period. Lynas reported receipt of the operating license renewal Aug. 22.

More recently, Lynas announced Sept. 6 that it had signed a memorandum of understanding with the Western Australia city of Kangoorlie-Boulder for “the review and due diligence of potential sites” for its new cracking and leaching plant.

“We are very pleased to announce this MOU with the City of Kalgoorlie-Boulder,” Lynas CEO Amanda Lacaze said in a prepared statement. “Kalgoorlie has a rich mining history and continues to work with industry to develop the region and its communities. Lynas already employs graduates from the WA School of Mines which is located in Kalgoorlie and we look forward to continuing this partnership.

“Access to infrastructure and a skilled workforce makes it an attractive investment destination and with this MOU we can further assess the suitability of potential sites in Kalgoorlie for our Cracking & Leaching plant.”

In other Lynas news, the company announced Australian conglomerate Wesfarmers would not continue to pursue a potential takeover bid initially announced in 2018.

Wesfarmers issued a proposal to purchase Lynas for $2.25 per share in March, conditional on several factors that included the renewal of the rare earths producer’s Malaysian operating license.

However, Lynas announced Aug. 22 that Wesfarmers did not intend to progress with its proposal.

“Wesfarmers remains focused on delivering value to its shareholders through disciplined capital allocation within our divisions and when considering new investments,” Wesfarmers Managing Director Rob Scott was quoted as saying.

In April, Lynas’ board rejected a $1.1 billion takeover bid from Wesfarmers.