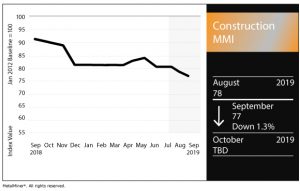 The Architecture Billings Index, put out by the American Institute of Architects, posted another flat performance in July.
The ABI, which measures billings at architectural firms, checked in at 50.1 in July (anything greater than 50 indicates growth). The reading marked an increase from the previous month’s contractionary reading of 49.1.
Despite the nominal growth this month, the reading marks a growing trend this year.
“Business conditions at architecture firms remained essentially flat for the sixth consecutive month in July,” the ABI report states. “Although the ABI score of 50.1 for the month technically indicates growth, the score is barely above 50, which means that the share of firms that reported increasing firm billings for the month is just slightly higher than the share that reported decreasing billings. Overall, this six-month stretch is one of the longest periods of essentially flat billings since the end of the Great Recession.”
Broken down by region, the West led the way this month with a reading of 51.2, followed by the Midwest (48.9), South (48.3) and Northeast (48.3).
MetalMiner’s Annual Outlook provides 2019 buying strategies for carbon steel