The drone and cruise missile strikes on Saudi Arabian oil installations this week caused a massive spike in oil prices as the market reacted with surprise to the news — but should it have been such a surprise?

The strike said to have been made by some 20 drones and a dozen cruise missiles on the world’s largest oil installation — a separation plant at Abqaiq, southwest of Dharan in Saudi Arabia — came after a smaller but similar strike on the main East-West pipeline in May and another on the Shaybeh field just last month. 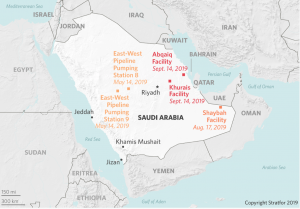 Iran has denied involvement in the attacks. Meanwhile, the U.S. and Saudi Arabia point the finger at Iran, saying it or one of its proxies is responsible, even if the attack may not have been sanctioned by the more conciliatory camp in Iranian politics led by President Hassan Rouhani. Speculation is it could have been the hard-line Revolutionary Guards and/or factions seeking to disrupt any prospects of a deal being made between the U.S. and Iran. If that was the intention, it has met with some success; there is no chance now of President Donald Trump meeting with Rouhani in New York, as was mooted just a week ago.

More to the point, consumers will be keen to understand what the likely direction of prices will be from here: will they drop back or is this just the start of an ongoing guerrilla war, in which repeat strikes over the coming months further escalates the chances of military action and greater supply disruption? 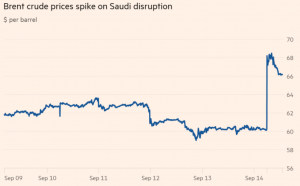 The oil market probably isn’t pricing in further disruption, according to Capital Economics in the Telegraph. They priced out three scenarios: 1) Aramco manages rapid repairs and a return to normal in a week, causing oil prices to settle at $60 a barrel 2) the disruption drags on for months, pushing oil to $85 per barrel and 3) this escalates to full military conflict and precipitates a spike to $150 per barrel by the end of the year.

Brent crude oil prices rose by almost $12/barrel to near $72/barrel when the market opened on Monday, then closed at $69.02/barrel, a 14.6% jump, the Financial Times reported. Trading volume across New York and London smashed daily records, with the equivalent of more than 5 billion barrels changing hands. The price is currently around $68.15/barrel, suggesting that, for now at least, the markets are relatively sanguine about an immediate escalation.

If there are no further strikes and neither Saudi Arabia nor the U.S. escalates the situation with retaliatory military action, the oil market can cope with the loss of 5% of global supply as a result of the damage caused to the Abqaiq and Khurais processing facilities.

The OECD states together have stocks of 2,931 million barrels. This is above the five-year average and enough to cover 60.5 days of demand; individually, not all countries are that buffered. China, for example, is still building storage and is correspondingly not so well-covered. Broadly speaking, though reserves are adequate, Trump has not shown any willingness to engage in military action during his presidency despite often bellicose language; his actions speak more of a president who prefers economic, rather than military, warfare.

The markets may therefore have it right. At $68/barrel, the price reflects a slightly tighter market, less willingness for exporters to discount prices or chase sales. It does not reflect an outright shortage, provided none of the parties take the decision to escalate hostilities or carry out more than a token retaliatory action.

Economically, the price increase only brings oil back to where it was in the early summer and will not have a detrimental impact on oil importers’ balance of payments or global growth.

Let’s hope cooler heads prevail. Many economies — Europe’s, in particular — are not in a strong position to weather significantly higher oil prices, with growth already under pressure.

All of this makes for an interesting fall.