The Construction Monthly Metals Index (MMI) held flat this month, sticking at an MMI reading of 77. 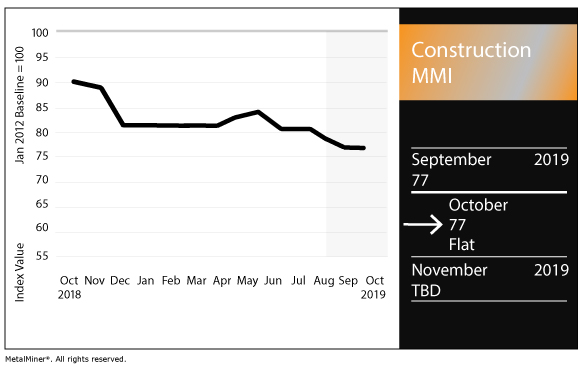 According to the U.S. Census Bureau, U.S. construction spending in August reached a seasonally adjusted annual rate of $1,287.3 billion, up 0.1% from the revised July estimate of $1,285.6 billion.

The Architecture Billings Index (ABI), released monthly by the American Institute of Architects (AIA), serves as an indicator of architecture billings growth in the U.S.

The ABI has been mired in a slump, coming in flat for six consecutive months prior to the most recent reading.

The recently released August ABI, however, reflected a downturn.

The August ABI checked in at 47.2, down from 50.1 the previous month (any reading greater than 50 indicates billings growth, while a sub-50 reading indicates contraction).

In its most recent ABI report, the AIA called business conditions “disappointing” for U.S. architecture firms this year.

According to the monthly survey of industry professionals included in the ABI report, business conditions are prompting some architecture firms to consider international opportunities.

“At present, only about 10% of U.S. architecture firms are currently working on international projects, while an additional 13% don’t have current projects, but have worked internationally within the past five years,” the report noted. “Another 13% of firms have plans to pursue at least some type of international work in the near future.”

Of the remaining nearly two-thirds, over half would at least consider an international project, according to the survey results.