The Automotive Monthly Metals Index (MMI) held flat this month for an MMI reading of 85. 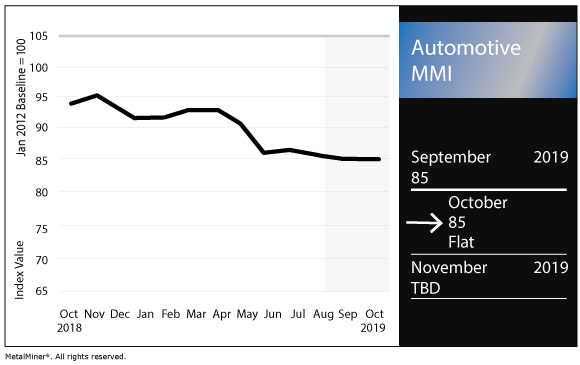 The Big 3, which now all report sales on a quarterly basis, released sales figures for the third quarter.

Negotiations between GM and the United Automobile Workers (UAW) union entered their third week this week, UAW rejected the latest GM offer on Sept. 30, according to a UAW statement.

“This proposal that the Company provided to us on day 15 of the strike did not satisfy your contract demands or needs,” UAW Vice President Terry Dittes said in a release. “There were many areas that came up short like health care, wages, temporary employees, skilled trades and job security to name a few.  Additionally, concessionary proposals still remain in the company’s proposals as of late last night.”

“Given that the U.S. market consumes about 110 million tons annually, and GM’s share represents about 8% of domestic steel production, it would take a 39-day strike to lower demand by 1 million tons, or 1%,” she wrote.

As of Thursday, Oct. 3, the strike has reached its 18th day.

Ford reported third-quarter vehicle sales of 580,251, down 4.9% on a year-over-year basis. However, Ford truck sales increased 8% year over year.

Honda sales were down 14.1% in September compared with September 2018 sales.

Toyota reported sales fell 16.5% in September on a volume basis and by 9.2% on a daily selling rate basis. Nissan’s September sales fell 17.6% on a year over year basis.

According to a jointly released forecast by J.D. Power and LMC Automotive, accounting for fewer selling days, September vehicle sales were down 7.8% compared with September 2018.

Ford will own a 49% controlling stake in the joint venture, with Mahindra owning a 51% stake.

“Ford and Mahindra have a long history of working together, and we are proud to partner with them to grow the Ford brand in India,” Ford’s Executive Chairman Bill Ford said in a release. “We remain deeply committed to our employees, dealers and suppliers, and this new era of collaboration will allow us to deliver more vehicles to consumers in this important market.”