An important source of precious metals — and in particular, Platinum Group Metals (PGMs) — is in a spiral of diminishing returns and could run out of cash in 2020 with consequences for metal supply and market prices.
Zimbabwe has been here before, it must be said.
Looking for metal price forecasting and data analysis in one easy-to-use platform? Inquire about MetalMiner Insights today!
Ever since its corrupt and ineffectual leader Robert Mugabe was thrown out a shade over two years ago, the hope has been his replacement Emmerson Mnangagwa would enact reforms that would reverse the decline and root out corruption. While Mr. Mnangagwa has made some positive changes, unfortunately, his administration hasn’t shown the greatest competency.
Meanwhile, unable to pay for much-needed imports, the economy continues to spiral down. Importing more than it exports, Zimbabwe is facing dwindling foreign exchange reserves that threaten to choke off what remains of industrial activity.
More pressing even than the lack of fuel and spares is the impact it is having on the population, raising the prospect of further unrest — even outright insurrection — as Stratfor suggests in a recent Worldview report.
Fuel and food shortages spurred angry protests that ended in a violent security crackdown in January 2019 and while the government prioritizes what funds it has to pay off, the military’s rank and file, whose support is crucial to the administration staying in power, is suffering along with the rest of the population.
Government workers have begun demanding either pay raises or payment in U.S. dollars, according to the Stratfor report. The country’s junior doctors have been on strike since early September and were recently joined by senior doctors as well. Teachers, meanwhile, have also limited work to just two days a week and the risk of significant widespread unrest grows.
Zimbabwe’s mining sector has been in gradual decline for years, the government has been desperate to encourage more value-add refining at home but every step it takes – like enacting export bans similar to Indonesia – has backfired, creating greater trade imbalances as desperately needed exports have been blocked.
The country’s largest export is actually tobacco, making up nearly half the $1.93 billion of exports in 2017, the last year data was available, but metals make up a sizable portion of what is left.
Precious metals make up $145 million, ferroalloys make up $172 million and chromium ore makes up $122 million. Some ore goes for refinement to South Africa, but Zimbabwe’s largest export market by far is China, accounting for 44% of exports, according to the OEC.
If PGM exports were disrupted due to extended public unrest, the platinum supply market would still function. Zimbabwe’s production at some 11 tons per year is a tenth of South Africa’s 110 tons and only half Russia’s 25 tons, but it remains more than the U.S. and Canada combined, so any serious disruption would create support for higher prices next year.
Looking for metal price forecasting and data analysis in one easy-to-use platform? Inquire about MetalMiner Insights today!
The same goes for palladium, which has broadly tracked above platinum this year and rhodium, which has already performed strongly on the back of emissions regulation changes, as this graph courtesy of Johnson Matthey illustrates. 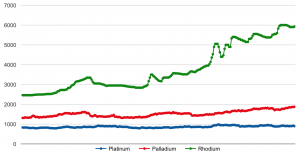 Source: Johnson Matthey
Zimbabwe has increasingly faced a precarious future. Once the stable and prosperous breadbasket of Africa, it has progressively slid into decline under corruption and misrule.
Despite the hopes of 2017 after Mugabe was dethroned, it looks as the next year could be its most testing challenge yet.