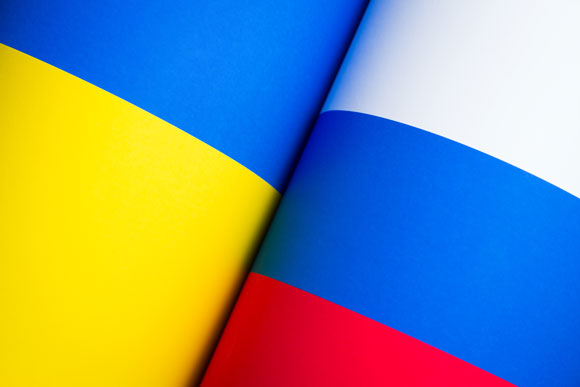 In the short term, a new five-year gas transit agreement between Russia and Ukraine, agreed just 12 days before the current agreement is to expire, is good news for Europe, Russia and Ukraine — a rare example of pragmatism and compromise in today’s winner-takes-all approach to diplomacy.

But in the longer term the agreement, heralding as it does a waning of the Russian-Ukrainian interdependency, removes an issue that demands a degree of cooperation and opens to the possibility that bilateral tensions could rise in the future.

Still, for now, as a Stratfor Worldview report observes, Europe will not have to worry about keeping the lights on or heating their homes this winter and nor will Ukraine (so economically dependent as it is on gas transit revenues).

The deal is the result of compromise on both sides.

As part of the deal, Russia will gradually reduce its use of Ukrainian pipeline infrastructure over the next five years as it expands its access to the European natural gas market through the Nord Stream 2 and TurkStream pipelines.

Ukraine, meanwhile, will use the next five years to continue its efforts to reduce its dependence on natural gas that comes directly from Russia by ramping up domestic gas production and searching for alternative routes for imports.

As gas volumes decrease through the Ukrainian system — decreasing from the current volume of 90 bcm to 65 bcm next year and just 40 bcm in 2021 — and the infrastructure continues to age, income would be expected to decrease and maintenance expenditure to rise. However, as part of the deal, Russia has agreed to fix transit fees over the next five years at a higher level to allow Ukraine to sustain its roughly $3 billion in revenue even though volumes will halve, Stratfor reports.

According to Reuters, President Donald Trump signed a bill late this month imposing sanctions on the Nord Stream 2 gas pipeline project led by Gazprom, Russia’s state-controlled gas company. The project aims to send gas under the Baltic Sea, bypassing Ukraine and doubling the capacity of the existing line. 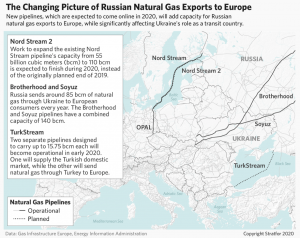 The threat of sanctions blocking access to the U.S. financial system forced Allseas, a Swiss-Dutch company that lays deep-sea pipe, to suspend work on the project. All but a 100-mile (160-kilometer) stretch remains to be completed, the article states.

Most European countries are furious at the U.S. action, seeing it as interference in an internal European project. The U.S. has been against Europe’s greater reliance on Russian gas since the Obama administration on the grounds it strengthens Putin’s economic and political grip on Europe. Europe suspects the U.S. simply wants to substitute cheap Russian gas for more expensive U.S. liquefied natural gas (LNG) shale gas exports, arguing that if the U.S. were really concerned about Russian influence over Europe, the president would be a stronger advocate of mutual defense and, in particular, NATO.

For now, work toward completion of the last 130 kilometers of the Nord Stream 2 pipeline has been stopped by the sanctions threats, but Russian state media reported Gazprom’s pipe-laying vessel Akademik Cherskiy, currently in the far east, would be brought to the Baltic to complete the pipeline regardless.

Europe’s desire to see dialogue and cooperation with Russia, as opposed to distrust and detachment, may yet prove naive.

Europe relies on Russia for something like half its natural gas supplies and Russia has shown it is not above restricting supplies to achieve its political ends, as happened in 2014 after the Russian annexation of Crimea and Moscow’s attempts to pressure Ukraine — and, hence, Europe — by cutting off gas supplies.

Some European countries agree with the U.S. that diversification, whether to the U.S. or elsewhere, would make more sense, however convenient and cheap Russian gas is. Over-reliance is clearly a risk, however strongly many on the other side argue Russia needs the revenues even more than Europe needs the gas.

Mark it down as yet another item on the world’s agenda to be resolved in 2020 requiring compromise and pragmatism all round.

PREVIOUS POST:
Week in Review: 2019 in review, aluminum production and steel production
NEXT POST:
India’s steel sector struggled in 2019 — but what does 2020 hold?