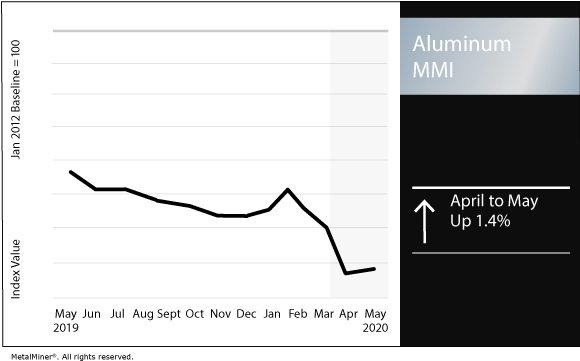 After moving in relative harmony, aluminum prices on China’s SHFE and global prices on the LME have diverged sharply over the last month.

Investors have dumped LME and bought SHFE on the expectation demand is picking up much faster in China than the rest of the world. Not surprisingly, the delta has attracted the arbitrage community and traders have started buying LME and selling SHFE in the expectation the gap must narrow.

With demand in China likely to be slow to recover as domestic markets wait for significant stimulus and export markets remain severely depressed, the SHFE premium is expected to narrow again soon. A surplus global supply market will weigh on prices generally and cap rises on the LME until such time as a significant improvement in demand becomes evident.

With ample global supply and lagging demand, aluminum — like other base metals — has seen better days.

Of that total, China accounted for an estimated 3.1 million tons, up from the 2.91 million tons produced in February.

In its most recently released quarterly report, Russian aluminum giant Rusal reported Q1 aluminum production of 940,000 tons, down 0.9% from the previous month, while alumina production fell 1.8% to 2.01 million tons.

Elevated aluminum supply has remained an issue, even during the coronavirus outbreak.

Worldwide primary aluminum supply increased by 3.5% to 16.12 million tons in Q1, “mostly driven by Chinese growth of 4.1% to 9.2 million tonnes and in RoW by 2.7% to 7 million tonnes,” Rusal noted, “in spite of around 24% of global capacity being loss making.”

“Around 0.4 million tonnes of capacity in RoW and 0.5-0.7 million tonnes in China was terminated due to falling prices,” Rusal said. “At the same time, falling raw materials prices including alumina and carbon, depreciation of local currencies as well as high closure and restarting costs continue to keep many smelters operating.”

Meanwhile, in the U.S., last month Alcoa announced it would curtail the remaining 230,000 tons of capacity at its Intalco smelter in Ferndale, Washington, citing “declining market conditions.”

The smelter, where 700 are employed, recorded a net loss of $24 million in the first quarter, according to Alcoa.

Previously, Alcoa curtailed 49,000 tons of capacity at the Intalco smelter; the remaining curtailment is expected to be completed by the end of July 2020.

In other news, Alcoa said it was suspending its global supply-and-demand forecasts for bauxite, alumina and aluminum as a result of uncertainty stemming from the COVID-19 pandemic.

The Department of Commerce has operated the Steel Import Monitoring and Analysis (SIMA) system since 2005, but a similar system for aluminum is not yet in place.

That could be changing.

On April 29, the Department of Commerce issued a notice in the Federal Register calling for comments on a proposal to implement an Aluminum Import Monitoring and Analysis (AIMA) system.

The Aluminum Association has in recent years called for the implementation of an equivalent system for aluminum imports, allowing for tracking of aluminum import trends. The industry group praised the DOC’s plans to consider an aluminum import monitoring system.

“This is an important step by the administration to fulfill its promise to establish an aluminum-specific import monitoring system,” said Tom Dobbins, president and CEO of the Aluminum Association. “Aluminum monitoring will enable government officials and the industry to better identify trends in trade flows and address misclassification, transshipment and evasion of duties. “The Aluminum Association, which represents the entire industry value chain in the United States, is calling on Congress to ensure this program is fully funded in the coming fiscal year.”