The Copper Monthly Metals Index (MMI) moved up 4.8% this month. 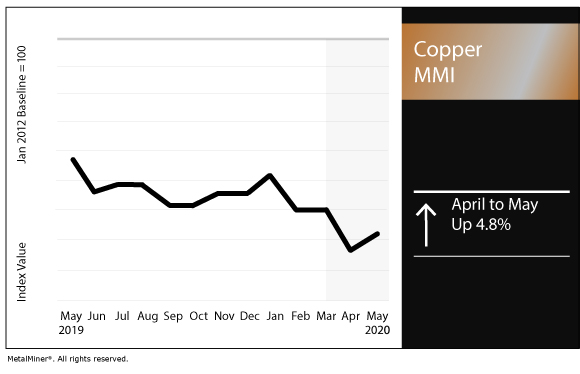 While the copper price has not quite recovered to pre-coronavirus levels, the metal made significant gains through the course of April.

This week, the price jumped to its highest level in about eight weeks, about a week prior to the aforementioned 2020 low.

Last month, MetalMiner’s Stuart Burns delved into the potential discovery of a significant deposit of lithium and copper in Cornwall.

“While prospecting for lithium brines in Britain’s extreme southwest county of Cornwall, Cornish Lithium’s initial boreholes hit big — not just in lithium, but for copper, too,” Burns wrote.

“The lithium brines were indeed present at some 500 meters down and deeper, an article by ProactiveInvestor reports.”

As Burns noted, the region is not new to copper discoveries.

“The drill site is smack dab in the middle of venerable old mining sites, such as United Mines, the Wheal Jane Mine and the Consolidated mine — sites that have delivered up not just copper, but also tin and zinc for centuries and at one time made Cornwall one of the preeminent mining areas in the world,” he wrote.

“The last of those mines was closed back in 1987, when cheaper to operate large open-pit mines did away with labor-intensive underground sites that seemed to have largely exhausted their richest seams.

“But Cornish Lithium’s find ranks as world-class — at least in terms of grades, the article states.”

Copper mine production ticks up slightly in January

The ICSG said the global copper market was balanced in January but posted a surplus of 65,000 tons when accounting for changes in Chinese bonded stocks.

Meanwhile, refined copper production rose 3% year over year, with a 5% jump from primary production and a 3% decline in scrap production.

“The global impact of the COVID-19 pandemic is an unprecedented challenge for individuals, governments and companies alike,” CEO Ivan Glasenberg said. “Disruptions to our business have, to date, been manageable and the majority of our assets are operating relatively normally, a credit to our people that have stepped up to the challenge of a changed working environment, especially those who continue to carry out their work on site at our industrial assets – Glencore’s frontline. Some industrial assets have been temporarily suspended, generally in line with national and regional lockdowns. Our updated full year production guidance reflects these impacts.”

In other news, operations at the Antamina copper and zinc mine in Peru were temporarily halted last month.

“Operations were initially halted for a two-week period from 13 April,” Glencore said in its quarterly report. “This has now been extended, with restart timing subject to Antamina being able to ensure the workforce’s ongoing health and wellbeing.”

The miner forecasts copper sales of 1.04 billion pounds the remainder of the year for a full-year total of 1.40 billion pounds, which would mark a 12% decline from the full-year estimate in January.

“FCX has completed a review of mine plans at each of its operating sites in North America to target a lower cost mining configuration, defer all nonessential projects and preserve long-term value in the long-lived resources,” the firm said in its quarterly report. “Under the revised plans, mining and milling rates for the year 2020 have been reduced by approximately 20 percent, resulting in a projected 12 percent decline in North America copper sales for the year 2020 (compared to the January 2020 estimate), lower unit net cash costs and lower capital spending requirements.