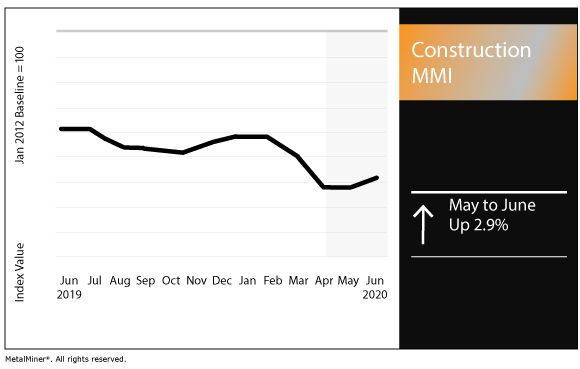 U.S. construction spending in April reached a seasonally adjusted annual rate of $1,346.2 billion, down 2.9% from the revised March estimate of $1,386.6 billion, the U.S. Census Bureau reported.

As for public construction, spending reached a seasonally adjusted annual rate of $342.1 billion, down 2.5% from the revised March estimate of $351.0 billion.

For units in buildings with five units or more, the April rate came in at 234,000.

The Architecture Billings Index (ABI), released monthly by the American Institute of Architects, hit what was then an all-time low of 33.3 last month.

This month, the ABI fell even further, recording a new all-time low of 29.4 (any reading less than 50 indicates a contraction in architecture billings).

“Following last month’s precipitous decline, billings at architecture firms sank even lower in April, as the COVID-19 pandemic continued to have a severe impact on firm business,” this month’s ABI report states. “The ABI score declined to 29.3, a new all-time low for the index (a score below 50 indicates decreasing billings), with more than half of responding firms reporting a further decline in their firm billings from March to April. Inquiries into new work also remained extremely low in April, although modestly fewer firms reported a decline in inquiries than in March. However, immediate prospects for new work remain bleak, as the value of new design contracts also remained extremely low.”

This month’s ABI survey asked firms about their participation in the government’s Payroll Protection Program (PPP) — part of the CARES Act — designed to aid businesses keep up with payroll expenses during the COVID-19 pandemic and subsequent restrictions.

According to the survey, 84% of responding architecture firms indicated they had applied for PPP funding, with an additional 2% indicating they intended to apply.

The average loan amount received by the responding firms was $395,000, the report stated.