The Copper Monthly Metals Index (MMI) increased 3.0% this month based on an increase in prices globally. 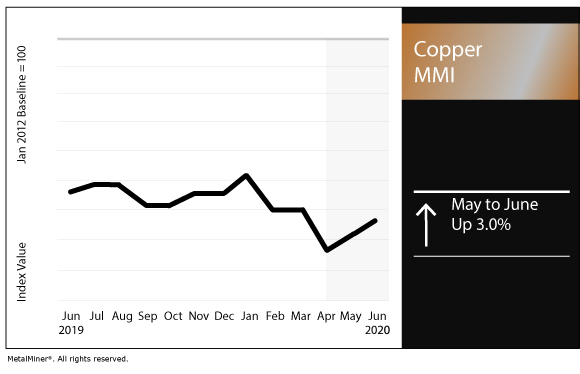 LME copper prices continued to increase throughout May. The price finally broke $5,000/mt on June 5, meaning it, along with zinc and lead prices, is back to pre-pandemic levels.

In the past two weeks, markets have continued to climb up despite the protests across the country and the increasing tension between China and the U.S. Base metals, particularly copper, are rallying as demand prospects increase.

On June 4, President Donald Trump signed an executive order to expedite the delivery of transportation infrastructure projects, civil works projects within the purview of the Army Corps of Engineers, and infrastructure and other projects on federal lands in an effort to speed up the economic recovery from COVID-19.
Additionally, the executive order asks agencies to expedite the work around the National Environmental Policy Act (NEPA), Endangered Species Act (ESA) and Clean Water Act (CWA) in order to expedite the aforementioned projects.
This executive order not only could have a direct impact on copper demand, it could also impact the U.S. mining industry, which sees it as an opportunity to reform the permitting process to allow for the augmentation of domestic copper supply and the reversal of copper import dependence.
The LME price increased 2.3% from June 4 to June 5, reaching a three-month high.

As the trade war between the U.S. and China eases, Chinese smelters have purchased at least two cargoes of copper concentrate from the U.S. The buyers, China Copper and Daye Nonferrous, acquired a shipment of 10,000 metric tons each.
The concentrate, which was purchased through traders, is expected to be sourced from the Mission mine in Arizona or Robinson mine in Nevada. The concentrate is expected to be cleaner when compared to that produced by the top producers, Chile and Peru.
China accounts for approximately 50% of global copper consumption. In September 2018, China imposed a 10% import tariff on copper concentrate that eventually climbed up to 25%. However, starting March 2, Chinese companies were allowed to apply for tariff exemptions.

Major producers in Chile such as Codelco, Glencore and Antofagasta are getting ready to negotiate work contracts with their unions.
In these circumstances, labor unions are not able to engage in collective bargaining due to the coronavirus pandemic, so they are expected to lose some of their previous benefits. These agreements are impactful because their tenure is at least a couple of years.
These agreements are particularly important because Chile is the largest producer and unions are accustomed to large benefits and bonuses. If the mining company gains the upper hand, as expected, this could mean significant cost reductions.
However, it is important for all parties to reach a consensus to avoid disruptions by strikes.