In this month’s Automotive Monthly Metals Index (MMI) report: Ford CEO Jim Hackett will retire, the company announced this week; General Motors has plans to add more than 2,700 electric vehicle charging stations across the U.S.; and U.S. sales continue to show signs of recovery, but July sales remained down compared with a year ago. 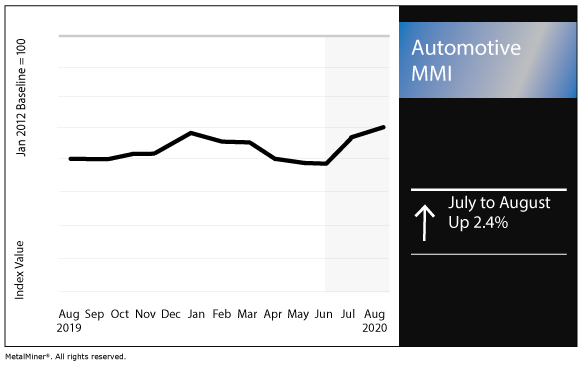 The automaker reported a net loss of $800 million in the second quarter, down 132% year over year.

“During the quarter, GM implemented zero-based budgeting and aggressively reduced its ongoing costs through significant austerity measures, including reductions in advertising and other discretionary spending, compensation deferments and certain employee furloughs,” the automaker said in its Q2 2020 earnings release. “These austerity measures are expected to normalize as production and demand stabilize, with some of the austerity measures remaining permanent.”

Even so, the company touted better-than-expected financial results for the second quarter.

“The successful and safe restart of production in the closing weeks of May, together with cost control actions, yielded positive results for North America, with an Adjusted EBIT of €39 million,” the automaker said. “U.S. consumer demand exceeded expectations and FCA improved U.S. retail market share in the quarter.”

For more news and notes on metals markets that directly or indirectly impact the automotive sector, make sure to sign up for MetalMiner’s free Gunpowder e-newsletter.

For the industry as a whole, the monthly forecast released by J.D. Power and LMC Automotive notes new-vehicle retail sales in July were expected to be down compared with a year ago.

The forecast projects retail sales of 1.13 million units, marking a 4.0% decline compared with their pre-virus forecast and down 9.5% compared with July 2019 sales.

Thomas King, president of J.D. Power’s data and analytics division, said July was a “slight pause” in the ongoing recovery of auto sales.

“One factor contributing to the pause in recovery in July is inventory constraints for many vehicles,” King said in a release. “While this is constraining overall sales, new production is arriving at dealerships daily and is being sold quickly to consumers.”

Circling back to Ford, CEO Jim Hackett will retire after three years in the position.

Hackett’s tenure proved to be a transformative time for the automaker.

In 2018, Ford announced plans to slash its North American sedan lineup, ending production for a number of car models as a result of declining sales contrasted with the popularity of trucks in the U.S market.

In addition, the automaker has stepped up its drive toward electric and autonomous vehicles.

“I am very grateful to Jim Hackett for all he has done to modernize Ford and prepare us to compete and win in the future,” said Bill Ford, Ford’s executive chairman, in a release announcing Hackett’s retirement. “Our new product vision – led by the Mustang Mach-E, new F-150 and Bronco family – is taking shape. We now have compelling plans for electric and autonomous vehicles, as well as full vehicle connectivity. And we are becoming much more nimble, which was apparent when we quickly mobilized to make life-saving equipment at the outset of the pandemic.”

GM to partner with EVgo to add EV charging stations

As electric vehicles gain market share, one limiting factor to date — at least, in terms of consumer perception — has been availability of charging stations.

In an internal combustion engine world, gas stations are, of course, ubiquitous.

General Motors recently announced it is teaming up with EVgo to bring 2,700 new fast charging stations to the U.S. over the next five years.

“The chargers will be powered by 100 percent renewable energy, aligning with our passion and commitment to sustainability both inside and outside our walls,” GM said in a release.

“Creating a world with zero crashes, zero emissions and zero congestion won’t be easy, but infrastructure growth is a significant step in the right direction.”

Whether you’re buying any of the metals in the Automotive MMI basket or not, stop obsessing about the actual forecasted price — it’s more important to spot the trend.