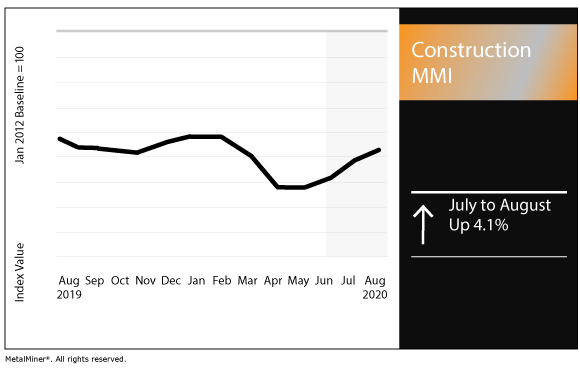 The Architecture Billings Index (ABI), released monthly by the American Institute of Architects, came in at a reading of 40.0 for June. (Any reading below 50 indicates contraction, while anything above 50 indicates growth.)
However, the June reading marked a significant jump from the previous month’s reading of 32.0.
“Business conditions at architecture firms continued to stabilize in June, following their peak declines in April,” the ABI report notes. “While the ABI score of 40.0 for the month means that the majority of architecture firms still saw their billings decline from May to June, the pace of that decline slowed significantly. Inquiries into new work nearly returned to the positive in June, as clients began trying to restart projects.”
By region, the West and Midwest led the way, posting readings of 36.8. The South came in at 35.9, while the Northeast checked in at 34.2.
This month’s ABI survey asked architecture firms about staffing change expectations.
Of the respondents, 45% said they expect the number of architecture positions at their firm to be the same at the end of the year as it was at the beginning. Meanwhile, 38% said they expected the number to decrease while 17% expect it to increase.

As we noted last month, the U.S. House of Representatives passed a $1.5 trillion infrastructure bill.
Unsurprisingly, the bill was met with opposition from Senate Majority Leader Mitch McConnell, who called it a “cousin of the Green New Deal.”
As Republicans and Democrats aim to potentially pass a new round of coronavirus-related stimulus, it remains to be seen where infrastructure fits in the picture.
In an op-ed for Fortune, U.S. Steel CEO David Burritt emphasized the need for infrastructure’s inclusion in the next stimulus bill.
“If lawmakers want to spark the economy, quickly create many jobs, and do the most good for the greatest number of Americans, there’s one clear answer: infrastructure investment,” Burritt wrote.
“This will have the additional benefit of making our economy more competitive globally by expanding U.S. capabilities, creating jobs, and providing opportunities for other nations to build and buy American products.”