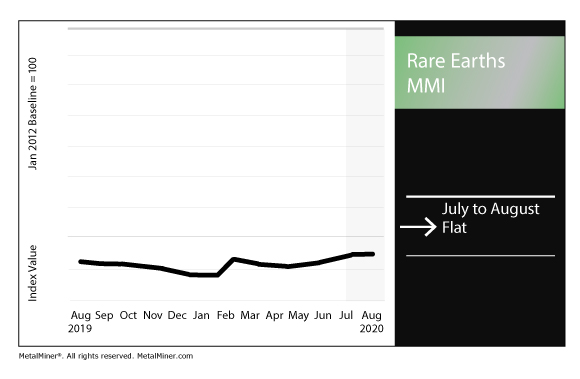 After awarding Phase 1 contracts to Lynas Corporation and MP Materials in April, the Department of Defense (DoD) opted to freeze funding for the projects pending further review. However, the DoD last month agreed to resume funding and move forward with the projects, as Reuters recently reported.

The projects entail the building of heavy rare earth separation facilities by the two firms in Texas and California, respectively.

The U.S. has long sought to curb its dependence on China for critical rare earths. Rare earths, while not actually rare, are used in a variety of high-tech capacities, including military applications.

Lynas announced July 27 that the Department of Defense had signed a contract for the work on the project, which Lynas will develop with Texas-based Blue Line Corp.

“As noted in our ASX announcement on 22 April 2020, Phase I funding provided by the DoD will allow Lynas and our U.S. partner Blue Line to complete a detailed market and strategy study plus detailed planning and design work for the construction of a Heavy Rare Earth separation facility,” Lynas said in the release. “In line with DoD Phase I milestones, we expect this work to be completed in the 2021 financial year.”

Breaking down the deals

Meanwhile, MetalMiner’s Stuart Burns weighed in on the developments in the U.S. rare earths scene.

“Lynas processes lanthanum (La), cerium (Ce), praseodymium (Pr) and neodymium (Nd) in Malaysia,” MetalMiner’s Stuart Burns explained. “It would be logical for Lynas to send the balance of its rare earths — otherwise known as SEG concentrate, short form for Samarium (Sm)/Europium (Eu)/ Gadolinium (Gd) concentrate — to the new facility it is building in San Antonio.

“The real value here is in the terbium (Tb) and dysprosium (Dy) content, along with the gadolinium (Gd), according to this post in Investor Intel.

“Currently, the only market for the SEG is China.”

In other Lynas news, the Australian firm took another step toward commencing operations at its new Kalgoorlie rare earths processing facility.

Lynas awarded a kiln contract worth U.S. $15 million to Metso Outotec. The kiln will be 110 meters long and weigh approximately 1,500 tonnes.

Furthermore, Metso Outotec will manufacture the kiln to “Lynas’ own design,” which “improves on the design of the four 60 metre kilns currently in operation at the Lynas Malaysia plant.”

As for MP Materials, it announced July 15 it will merge with Fortress Value Acquisition Corp (FVAC).

MP Materials is the owner and operator of the Mountain Pass mine in California.

Drew McKnight, CEO of FVAC, stressed the need to “find a reliable and resilient source for rare earths,” calling it “crucial for the U.S. and global supply chain.”