Home | Metal Prices | Is silver pausing for a breather or has the market topped?
Market Analysis

Is silver pausing for a breather or has the market topped? 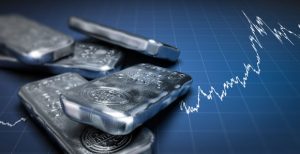 Silver’s rise has been meteoric since its low in mid-March.

The precious metal’s surge has been particularly notable over the last month.

Both gold and silver have benefited from cheap money, a weak dollar and stronger oil prices. The yield on the benchmark 10-year U.S. Treasury note is presently around 0.57%, while the oil price is holding around $42 per barrel.

Driving all commodities higher, the U.S. dollar index has slipped nearly 7% in the last three-month period. Measured against six major currencies, the dollar is down nearly 9% from its March highs and is on track for its worst month since 2011, according to a Yahoo Finance report.

Other investment products, like Bitcoin, are also up sharply.

However, gold and silver have been stealing the headlines.

Investors are betting on gold going through $2,100/ounce shortly and silver to top $30/ounce.

Unlike gold, though, the fundamentals for silver have some decent legs.

The LME has operated the LMEprecious suite of exchange-traded contracts since 2017. In a recent update note, the LME reported industrial demand for silver last year topped 16,200 tons. Furthermore, demand is forecasted to increase thanks to its role as a component in antennae for the new 5G mobile network infrastructures being rolled out around the world.

Like gold, silver benefits from the jewelry market, which is expected to pick up as economies gradually recover from lockdowns. In addition, silver has a wide range of industrial applications, which are coming back fast — first in Asia, but now in Europe and the U.S.

Looking ahead at the silver price

Two weeks ago, analysts at Goldman Sachs lifted their 12-month forecast for silver to $30 per ounce by year’s end.

However, that prediction became within reach after just a fortnight.

The bank’s prediction was based largely on the back of an expected continuing weakness in the greenback. The analysts argued a further 5% decline is probable before the year’s end. On top of that, no end is in sight for rock-bottom interest rates.

Silver’s rise has been so dramatic over the last 30 days; a pullback is to be expected.

In fact, silver bulls are said to be looking for short corrections to create more value to add to positions.

Both gold and silver retrenched yesterday. Gold fell below $2,000/ounce, while silver dropped toward $27/ounce.

But whether that will be enough to dampen spirits for a push higher in coming weeks will depend on the course of the dollar, indications on post-pandemic recovery and further action by the Fed regarding longer for lower interest rates.

You’d be brave to bet against it.

PREVIOUS POST:
Rare Earths MMI: Pentagon forges ahead with Lynas, MP Materials projects
NEXT POST:
This Morning in Metals: Last call to sign up for the MetalMiner 2021 Forecasting Workshop