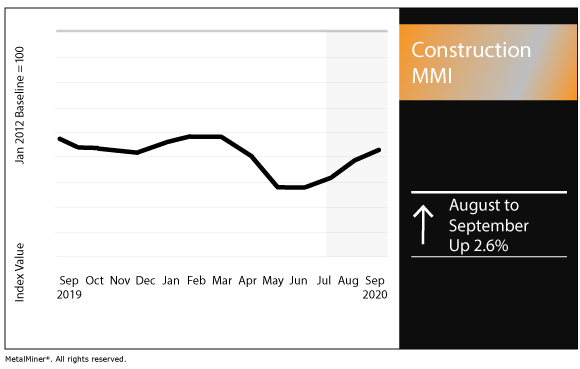 The Construction Monthly Metals Index (MMI) gained 2.6% for this month’s MMI reading.
We’re offering timely emails with exclusive analyst commentary and some best practice advice – and you choose how often you receive it. Sign up here.

For another month, the Architecture Billings Index (ABI) held flat for a reading of 40.0.
The index, put out monthly by the American Institute of Architects, measures billings growth (any reading less than 50 indicates billings contraction).
“Inquiries into new projects continued to show just a modest decline, but more seriously, the value of new signed design contracts slipped from its June level,” the latest ABI report notes. “Unfortunately, with the continued resurgence in COVID-19 cases in many areas of the country, clients may be interested in starting new projects, but remain reluctant to sign on the dotted line.”
By region, the West posted the strongest reading, checking in at 40.9. Trailing the West were the South (40.7), the Midwest (40.1) and the Northeast 36.8).
This month’s ABI survey asked architecture firms about their experience with the federal Payroll Protection Program (PPP).
“Overall, 85% of responding firms reported that they applied for, and received, a PPP loan,” the report states. “Just 1% applied for a loan but did not receive one, while the remaining 14% did not apply for a loan at all. Firms with an institutional specialization were most likely to report receiving a PPP loan (89%), followed by firms with a commercial/industrial specialization (81%), and firms with a multifamily residential specialization (75%).”

In positive economic indicators, last month we noted U.S. housing starts in July jumped back up to pre-pandemic levels.
July starts reached a seasonally adjusted annual rate of 1.496 million units, according to data from the Census Bureau and the Department of Housing and Urban Development.
The July start rate marked a 22.6% increase from the previous month and a 23.4% increase year over year.