The Rare Earths MMI gained 8.3% for this month’s MMI reading. 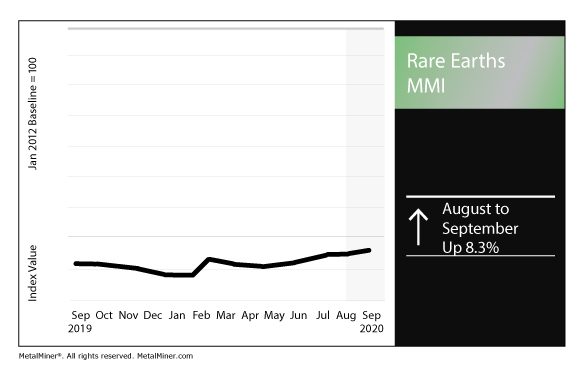 Congressmen Lance Gooden (R-TX) and Vicente Gonzalez (D-TX) recently introduced the House’s version of a bill that seeks to decrease the U.S.’s dependence on China for rare earths.

“The United States is more dependent than ever on the importation of the resources that drive our economy, enable us to build advanced technology, and ensure our national security,” Gooden’s office said in a release. “Thirty-five of these rare earth minerals are designated by the Department of Interior as ‘critical’, and we source fourteen of them entirely from foreign suppliers. China is a leading supplier for twenty-two of the thirty-five. The RARE Act is specifically designed to change that.”

In late July, Australian rare earths firm Lynas Corporation announced it had signed a contract with the U.S. Department of Defense for Phase 1 work on a heavy rare earths separation facility in the U.S.

In a similar vein, the European Commission also recently announced its own action plan related to its raw materials supply security.

The plan also includes an updated list of those materials deemed critical.

The 2020 list includes heavy and light rare earths elements, in addition to raw materials like coking coal. New materials added to the 2020 list that were not on the 2017 list were titanium, lithium, bauxite and strontium.

Chinese rare earths exports to the U.S. could be on the decline

The South China Morning Post reported China’s rare earths exports to the U.S. could fall by anywhere between one-fourth and one-third this year.

For instance, Adamas Intelligence forecast global consumption of NdFeB alloys could fall by as much as 9.3% this year. The figure comes on the heels of growth at a CAGR of 6.4% from 2015-2019.

However, Adamas did offer a silver lining.

“However, with the ongoing re-opening of key demand markets through the end of 2020 and into 2021, we expect demand for most end-uses and applications to rebound strongly in 2021 and 2022 and thereafter rise steadily through the end of the decade and beyond,” the research firm said.