The Copper Monthly Metals Index (MMI) increased 5.1% for this month’s value, as copper prices continue to pick up globally. 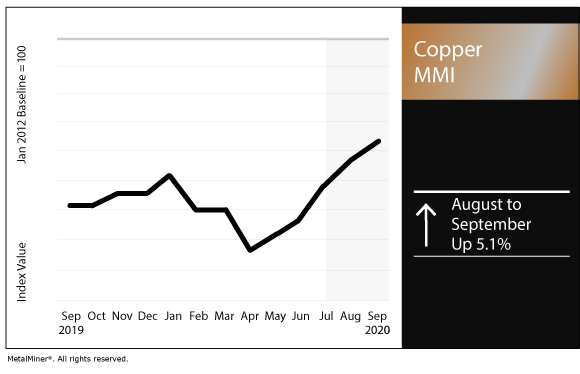 LME copper prices declined for the first half of the month and, after increasing, traded sideways, moving from $6,439/mt at the end of July to $6,702/mt in August. The SHFE price followed a similar trend to the LME price. Both prices had not reached this level since June 2018.

Copper inventories in LME warehouses continued to decrease, closing at 89,350 tons. Stocks have not fallen to this low of a level since January 2006.

On the other hand, SHFE stocks had the exact opposite trend. SHFE stocks continued to increase throughout the month, rising to 170,086 tons this month. These trends have only accelerated in the first weeks of September.

Copper prices are partly driven by high Chinese demand. Consumption increased 14.9% year over year during the January to June period, up to 12 million tons.

Cuts on the supply side may have resulted in temporary fears in the market.

Chinese refinery capacity declined in recent months. Summer maintenance, along with concentrate supply tightening due to the pandemic, brought down refined production. Production fell by 5.3% to 814,000 tons in July, according to the National Bureau of Statistics.

China does not appear to be the only country producing less refined copper.

For example, Rio Tinto delayed the restart of its Kennecott mine in Utah due to maintenance.

As concentrate supply tightens, the treatment and refining charges that miners pay to the smelters continue to decline.

Even though lower TC/RCs help miners’ profitability, it decreases that of smelters. This might have negative effects on refined metal, particularly on China, as its smelters rely heavily on concentrate imports.

Imports during June and July were driven by the spread between LME and SHFE prices, which made it cheaper for traders to purchase overseas rather than in China.

Moreover, Antaike mentioned China’s State Grid will increase its investment by the end of 2020, which will increase copper demand.

Are you under pressure to generate copper cost savings? Make sure you are following these five best practices!